The Nordic Council of Ministers’ Office in Estonia has turned 30! 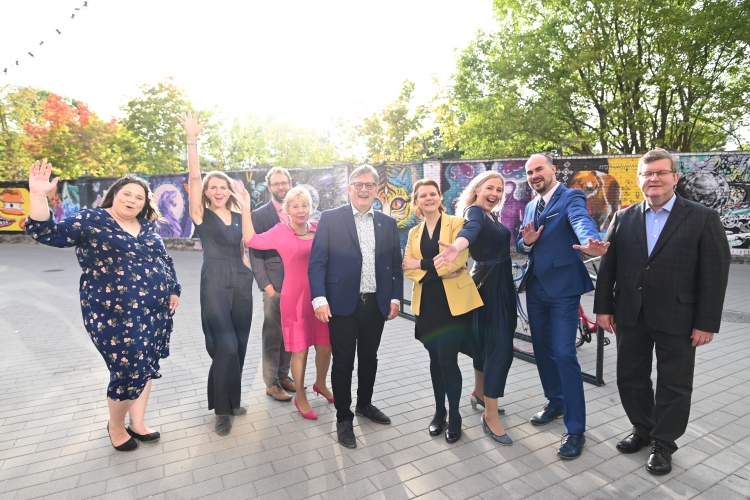 Back in 1991, the Nordic countries decided to open a representative office in Estonia. This was a bold decision for the time; indeed, one that was taken somewhat precipitously, considering Estonia had yet to regain its independence. It was not long before the nation won back its freedom, however, thanks to which 2021 marks both 30 years since the restoration of independence and three decades since the Nordic Council of Ministers (NCM) started operating in the country.

Our Tallinn office was initially referred to as the NCM Information Bureau, as it raised awareness on all manner of issues related to the Nordic countries. During its early years the office was frequently visited by Estonian president Lennart Meri, since our telephone lines were considered much more secure than those in the presidential palace. The Internet wasn’t very widespread at the time, with most documents being sent by post or fax, so our Estonian office was ahead of its time by local standards in being connected to the rest of the world by e-mail from an early stage.

The NCM opened a second office in Estonia, this one in the winter capital Otepää, in autumn 1991, which moved a year later to Tartu. Our main aim was to contribute to partnerships in priority areas of shared interest in the Nordic countries and Baltic States, establishing and extending networks and promoting cooperation between agencies and organisations.

Three decades is a long time, during which we’ve achieved quite a bit. We’ve sown quite a lot of seeds and watched them bear fruit. For example, the Nordic Poetry Festival – the brainchild of our long-standing adviser Eha Vain – evolved into the very successful literary festival Head Read, while the Nordic Film Festival spawned what is now one of the most prestigious events of its kind in the world, the Black Nights Film Festival. Those seeds wouldn’t have been able to grow without the support and know-how offered by our friends, colleagues and partners in the Nordic countries and Baltic States.

Look from the video how much we have achieved during these years:

Led by our office, a number of initiatives have been organised fostering cooperation in key areas: protection of the environment; migration and integration; research and innovation; the social sphere; culture; and others. Since 2008, Estonia has been taking part in the Nordic-Baltic educational cooperation programme Nordplus, the largest of the support programmes offered by the NCM, with an annual budget of around 9.3 million euros. Over the years it has supported more than 5700 projects. Alongside the other Baltic States and Nordic countries, Estonia is an equal partner in the NCM’s cultural and public administration mobility programmes. For example, almost 3700 public servants took part in the latter from 2011-2020, with more than 600 different projects being granted funding. NCM programmes also support cooperation between NGOs and many other spheres.

Our office in Narva, which we opened in 2016, has contributed significantly to developing local life and promoting Nordic values. The events our office coordinates are affordable for residents of the city and surrounding areas and are aimed at all ages, from school children to pensioners. Nordic culture and well-being are becoming more familiar to the people of Narva, who are already au fait with terms like lagom and hygge.

In the early years following the restoration of independence, our office helped the Estonian state build up the agencies and structures it needed in order for the country to be governed as democratically as possible. Over time, our partnership developed further, becoming much more equal. Today, know-how moves in both directions; for example, the Nordic countries are very interested in Estonia’s experience in the field of digital services.

A recent survey showed that 90% of Estonians consider cooperating with their Nordic neighbours to be important or very important. The fields of cooperation considered most important by residents of all three Baltic States are trade, tourism, education, research and culture. Exchange of experience, trade and a boost to competitiveness continue to be seen as the greatest benefits of cooperation with the Nordic countries. As such, it can be said that support for future cooperation is ensured.

One of the key areas to which the NCM will be looking to turn its attention in the coming years is sustainable development. In light of the looming climate crisis and worsening inequality, the need for a sustainable economy is more pressing than ever. Other important areas to focus on are competitiveness and social equality. The fewer people there are who feel that they’ve been shunned by society, the more successful, innovative and prosperous society will be.

Together we’re stronger. The Nordic countries’ cooperation with the Baltic States, their nearest neighbours, will continue in the coming years so that together we can make the Nordic-Baltic region one of the most integrated on the planet and create a better world for future generations.