Merle Kuusk: “Nordic welfare lies in atmosphere and experience, not in things” 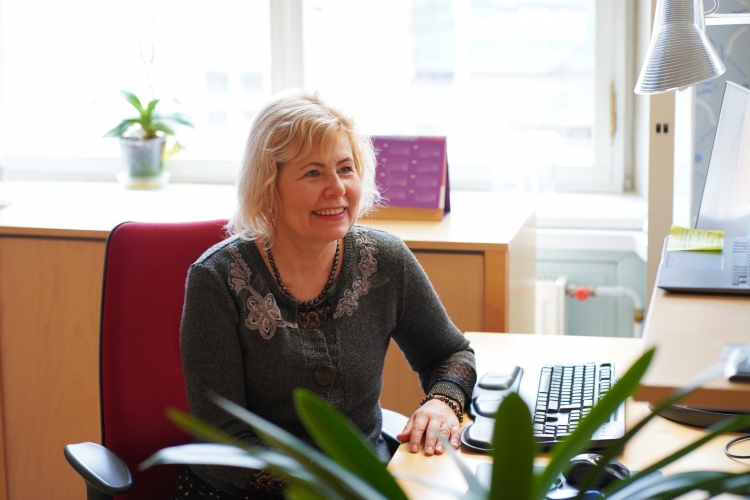 Merle Kuusk is one of the longest serving employees of the Estonian Office of the Nordic Council of Ministers (NCM), who was already interested in the Nordic countries at the time the Republic of Estonia regained its independence. She ended up working for the NCM as a result of her activity in the Norden Association of Estonia. She has been working for the NCM for 20 years by now and she specialises in topics concerning welfare society.

Merle recalls that the idea for the establishment of the Norden Association of Estonia came from the letter sent to the office of the Popular Front of Estonia in May 1989 by Norwegian reporter Morten Bakkel, who mentioned the Norden associations operating in Nordic countries and their union. Bekkel’s advice was to establish a similar association in Estonia in order to broaden the contacts of Estonian democratic movements. Twelve people active in the Popular Front and culture – Mati Hint, Ülo Kaevats, Oleg Kangur, Marju Lauristin, Jüri Luik, Eino Muruste, Rein Tamsalu, Andres Tarand, Mari Tarand, Mart Tarmak, Sirje Trei and Peeter Vihalemm – established the Norden Association of Estonia in the autumn of that same year. The association’s objective was to develop cooperation between Estonia and the Nordic countries, and their joint activities based on their history, common interests and cultural traditions.

In March 1990, Merle noticed an ad in the paper, where the newly established Norden Association of Estonia invited people interested in the Nordic countries to a meeting to introduce the association’s objectives and find members. She went to the meeting and soon started volunteering as the association’s secretary. Soon, the association had to find itself a new office, as the building where it was located at the time was demolished. The first director of the newly opened Information Office of the Nordic Council of Ministers in Tallinn, Leo Salonen, allowed the association to use their office premises in Tolli Street. In return, Merle took care of some of the NCM’s affairs a couple of days a week. Later, she organised various projects in the NCM and worked for the Danish Cultural Institute for a couple of years. In 2001, Kalli Klement, the then director of the NCM, offered Merle the position of an adviser.

Merle has a lot of project experience

“Everything that concerns gender equality and runs horizontally through all of the priorities of the NCM ends up on my desk,” explains Merle. “We initiate some projects ourselves in cooperation with local as well as Latvian, Lithuanian and Nordic partners. One of these projects, for instance, is the project ‘New ways to tackle gender-based violence: the Nordic and Baltic approach in 2021-2022’, which we are co-funding and where Estonian ministries, the Social Insurance Board and the Police and Border Guard Board play a central role,” she adds.

Other projects, however, start on the initiative of the Nordic countries: “For example, the initiator of the project ‘Nordic Baltic pilot project on cooperation on social affairs and health’ is Sweden, which is the Presidency of the Nordic Council of Ministers, and its responsible organiser is our Latvian office,” says Merle. The first meeting of the officials who work on the policies and practices concerning people with special needs in the Nordic countries and Baltic States, the objective of which was to create a functioning network for sharing information and best practices, was held in Tallinn.

Merle has contributed to numerous different projects, such as the “Women in Politics” project of Praxis Think Tank, the “Pricetag for Equality” seminar on the inclusion of people with special needs in society organised by photographer Jyri Pitkänen and author Eveliina Talvitie, and the Democracy Fitness aimed at students, which was brought to Estonia by the Opinion Festival.

One of the most important completed projects in Merle’s opinion is the Nordic-Baltic campaign against trafficking in women, which took place simultaneously in all countries in 2002. Merle has also organised many expert seminars, conferences, roundtables, etc. in the Baltic Sea region that deal with the topics of human trafficking and victim support within the scope of the projects implemented from 2010–2019. The objective of the joint projects of the Nordic countries, Baltic States and northwestern Russia has been to train specialists and strengthen their network, so that they can join forces to solve cross-border crimes efficiently. The European Union has highlighted the partnership between the Nordic countries and the Baltic States in their fight against human trafficking as an excellent example of regional cooperation.

One of Merle’s favourites is the series of Nordic-Baltic creative forums held from 2012 to 2016, the goal of which was to make learning more exciting and playful, and to put a sparkle in eyes of everyone in the classroom. “The organisation of the forums was led by our former cultural adviser Eha Vain and had the excellent opportunity to help with the forums on Naissaar, in Käsmu and in Illuka,” reminisces Merle.

The creative forums consisted of theoretical presentations and creative studios/workshops, where participants could test their new knowledge. The participants were asked to approach the multifaceted concept of creativity with an open mind to see how exciting ideas, solutions and methods can often be implemented in untraditional ways – e.g. teaching maths by dancing. “I hope that the participants, who included teachers, school and hobby managers, and culture and education officials, have been able to test the new methods in their work and connect different subjects and areas with them,” says Merle with hope.

Merle mentions the Opinion Festival, which has used Almedalen as an example, when speaking about plans for this year. “We’ll be taking part for the sixth time and this year. Three discussions and an evening reception will be held in the Norden zone on 13 August,” says Merle. “We’ll also present a Nordic comedy in the film programme. Once again, we’ll use the economical and environment-friendly Nordbus to go to the Opinion Festival and offer bus transport to our partners and the speakers joining our discussions.”

Merle is on her way towards Nordic happiness

Merle says the main thing she has learned from working for the NCM is the Nordic work culture – planning well ahead, a calm and exact working style, and a joyous outlook on life. “When we’re at the office, we have our traditional morning fika, a cosy coffee break,” says Merle. “We also discuss work, but we sit comfortably on the sofa by the coffee table when doing it.”

Merle has started following Nordic values in her daily life as well. For example, she’s a big believer in hygge, i.e. wellbeing that lies in the atmosphere, surrounding environment and experience, not things. “Hygge can be found in candlelight, a good book, food and drink, relationships or job duties,” says Merle. “Now that I’m constantly focused on it, I’ve started noticing increasingly more beautiful moments that bring me joy. This hygge attitude is probably the key to the happiness of the Nordic people and I’m also on my way there.”

Music makes you want to be a better person

This close cooperation with the Nordic countries has also influenced Merle’s cultural preferences. “Speaking of music, my undisputed favourite for years has been Norwegian saxophonist and composer Jan Garbarek,” says Merle. “I was introduced to his music by my good former colleague and friend Eha Vain. Garbarek’s concert in St Charles's Church was an unforgettable experience and made me want to be a better person – I hope I did become better, even just a little bit!”

Speaking of children’s books, Merle recommends The Story of The Blue Planet by Icelandic poet and writer Andri Snær Magnason, which was recently published in Estonian. Merle also has an unforgettable memory of Faroese poet Tóroddur Poulsen reading his work to the audiences at the poetry festivals of the NCM held in the 2000s. Merle recalls that when Poulsen read out the poem below, she was most impressed how this big man chanted with his thundering voice with increasing speed and strength:

This and some other poems by Poulsen have been published in Estonian in the anthology To the Other Side of Blue: Poetry from Ten Countries, Tallinn, 2004.

Free time is enriched with grandchildren and gardening

Merle likes spending her free time in her garden – there’s always something to do there. At present, she’s interested in permaculture and how to implement these principles in the garden. She also likes just walking and cycling, or skiing in winter.

Merle dedicates at least one day a week to her grandchildren. “You never get bored with them – you can invent new games and transform yourself into different characters,” says Merle. “We always have lots of fun! Have you ever thought that the spring flowers called snowflakes aren’t actually made of snow and snowdrops and look like they’ve withered, as their blossoms point downwards? These are the observations made by my three-year-old grandson that always make me laugh!”