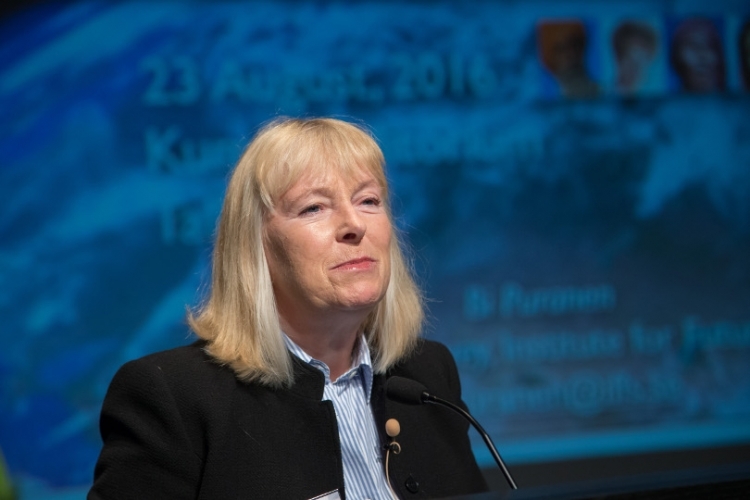 A conference dedicated to the 25th anniversary of the restoration of Estonia’s independence was held at Kumu on 23 August. Entitled ‘Estonia AND the Nordic countries – Estonia AS a Nordic country?’, it shone the spotlight on issues related to identity and values. The conference was organised by the Centre for Ethics of the University of Tartu, with support from the Nordic Council of Ministers’ Office in Estonia (among others).

Chief organiser and moderator of the conference Margit Sutrop remarked in her opening address that the key question is what Estonia has to both learn from and share with the Nordic countries. Which direction is Estonia looking to take, and what is it looking to become? Developments in various fields over the last 25 years would not have been possible, Sutrop said, without the backing of supporters from the Nordic countries. The fact that Estonia at its core is aligned with its Nordic neighbours has also been emphasised by Estonian political figures. Sutrop went on to define two types of freedom: freedom from something is valued in Estonia – negative freedom – but not the freedom to do something i.e. the positive freedom that is valued in the Nordic countries.

During the introductory part of the conference, Estonian Minister of Education and Research Jürgen Ligi stated that Estonia and the Nordic countries are bound by geography and divided by history. He said that Estonia shares certain ethics with its northern neighbours – for example, the business culture of the Estonian state is very much Nordic in its disdain for corruption. He also remarked that the same steps have been taken in education throughout the region, with a great deal of inspiration being drawn from the Nordic countries.

In his welcoming address, Christer Haglund, the director of the Nordic Council of Ministers’ Office in Estonia, highlighted points of history and culture that bind Estonia and the Nordics together. He said that Estonia shares the same values as the Nordic countries and that faced with the challenges of the modern world it is important to champion the success of the Nordic-Baltic region.

In a video address, President Toomas Hendrik Ilves remarked that Nordic values have taken on great currency in Estonia: solidarity, compassion, the role of women in society and equality. As the patron of the ‘Estonia AND the Nordic countries – Estonia AS a Nordic country’ essay competition he asked its participants which of the alternatives we most want to be like. President Ilves said that he himself finds the Nordic countries the most agreeable model to emulate.

Making presentations during the ‘Historical and contemporary perspectives of Nordic identities’ part of the conference were Stein Kuhle from the University of Bergen and Scandiphile and historian Mart Kuldkepp from University College in London. Kuhle provided an overview of the formation of Nordic identity at the political level from the 1830s to today and of aspects of the Nordic model – the welfare state, democracy and institutionalised cooperation. Kuldkepp’s presentation focussed on the development of the notion of Estonia as a Nordic country in Estonian historical writing and thought.

World Values Survey Association secretary-general Bi Puranen and University of Tartu and University of Warwick professor of psychology Anu Realo spoke during the part of the conference that focussed on Estonians’ values and how they have changed over the last quarter of a decade. Puranen compared the similarities and differences between Baltic and Nordic values and stated that one key difference is trust: in the Nordic countries people are encouraged more to trust others, while in Estonia trust has been a rapidly growing value. Puranen said that the core Nordic values are solidarity, equality, emancipation and inclusion. In her presentation, Realo, who is the Estonian coordinator of the World Values Survey, focussed on values that are held to be important in Estonia. She said that secular, rational values (as opposed to traditional values) dominated in both 1990 and 2011. At the same time, unlike the Nordic countries and similar to many other former Soviet states, there is an emphasis in Estonia on values linked to survival.

In his presentation, Happiness Research Institute CEO Meik Wiking provided an overview of how happiness as a concept has developed in political paradigms and how happiness is measured. The Nordic countries always rank among the top 10 in happiness surveys and Wiking explained that there are various reasons for this – the universal social welfare system, the high level of equality, trust, balance between work and private life, job satisfaction, active civil society and prosperity.

The final and very enjoyable presentation at the conference was given by author Valdur Mikita, who spoke about the Estonian affinity for nature and the fact that the country is currently experiencing its biggest ever shift in cultural identity.

Videos and presentations from the conference can be found on the website of the Centre for Ethics of the University of Tartu.