Creative entrepreneurs take a peek at the Norwegian design market 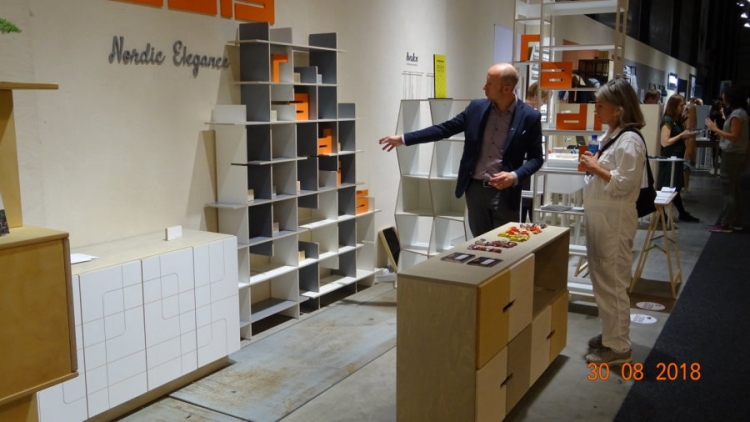 Creative entrepreneurs from Estonia recently promoted their products and services at the 2018 Nordic Buzz travelling trade fair, which showcases the work of young designers from the Nordic countries. This year’s event was held as part of the Oslo Design Fair in Norway. Participation in the fair forms part of the PESA+ export programme of Creative Estonia.

The Oslo Design Fair is a forum for entrepreneurs to mix and meet. Lillestrom Trade Hall, in which the event was held, was visited over the four days of the fair mainly by purchasing agents. The Estonian entrepreneurs attending the event spoke – and promoted their products – to everyone they could. Since the fair primarily focussed on lifestyles and interiors, the Radis display garnered rather a lot of attention. “We realised that quite a few Norwegians liked the Nordic-minded design of our furniture,” said Mauri Abner from Radis Furniture. “Just as important, we now know which channels to use to offer our furniture.”

Preparations for the event started early, with Norwegian representatives of Enterprise Estonia giving people tips and entrepreneurs already operating on the Norwegian market sharing their experience at a seminar organised by Creative Estonia. The speakers highlighted what sets the Norwegian market apart from others, recommending that people communicate in Norwegian and mentioning that making contact with people can be complicated and that the market is saturated.

All of the companies taking part nevertheless managed to make useful contacts at the fair and were given feedback on their products. “Since there were no other carpet brands at the event, I made quite a lot of important contacts,” said Annike Laigo. Conversely, Woolish faced a lot of competition at the event, although their product stood out for its quality and quite a few people showed interest in it. KR Stuudio had the opportunity to showcase not just their products, but also their services: laser-cutting and engraving. Whereas the amounts are huge when ordering from China, smaller series can be flexibly produced closer to home, and the more flexible supply times offered by the Estonians could also bring significant sales success. Lisa Kroeber Jewellery gained an order from the Norwegian National Museum, which purchased the majority of the company’s jewellery for its museum store.

The Estonian design entrepreneurs at the event were also visited by the Estonian Ambassador to Norway, Ms Janne Jõesaar-Ruusalu. Representatives of the Embassy of Finland had also come along to support the Finnish designers taking part.

“All in all the fair went really well, with the entrepreneurs gaining contacts and getting feedback on their products,” said Creative Estonia project manager Merilin Laager. “We’re all stronger now for the experience and we know that Estonian products have a place in the Nordic countries thanks to their thoughtful design and level of quality.”

The participation of Estonian companies in Nordic Buzz was organised by Creative Estonia, the development centre for creative companies in the country.

Design entrepreneurs from Estonia, Finland and Denmark attended the event together. Participation was supported via the regional fund of Enterprise Estonia and by BSR Innovation Express.

The article was originally published on the Creative Estonia web page on September 11th 2018.