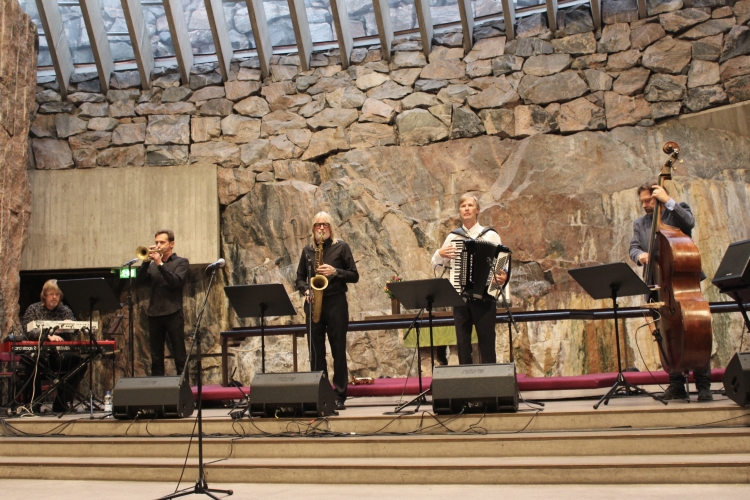 The Baltic festival ‘Estonia, Latvia, Lithuania x 100’ was held in Helsinki during the last week of August. It was organised by the Nordic Council of Ministers’ Offices in the three Baltic States in association with the Nordic Culture Point in Helsinki to celebrate the 100th anniversaries of the countries’ independence.

An overview of the festival is given by Eha Vain, the cultural adviser of the Nordic Council of Ministers’ Office in Estonia.

The Poetry Night on Sunday 26 August, held at the National Theatre Stage Club, featured Eeva Park from Estonia, Arvis Viguls from Latvia and Gabrielė Labanauskaitė from Lithuania. The recitals were musically accompanied by violinist Rista Tuuri. The two-hour performance was attended by a large audience who responded very warmly to the poetry and music. The event marked the end of the Runokuu calendar and the opening of the Baltic festival.

The festival’s first topical seminar on 29 August was inspiring and illuminating. Respected scientists and university lecturers presented their views on the question of nordicness and complemented each other in an interesting discussion on the topic. The panellists included Mart Kuldkepp from Estonia, Gustavs Strenga from Latvia and Professor-Doctor Mindaugas Jurkynas from Lithuania, and moderator Ainur Elmgren from the University of Helsinki.
Mart Kuldkepp: “It was very enlightening to compare and relate Estonian, Latvian and Lithuanian perspectives of nordicness, and the moderator’s experience of having lived in various European countries (Sweden, Finland, Germany and France) helped to provide further insight into the understanding of the concept.”

The evening concluded with a six-hour movie marathon of recent feature-length films from Estonia, Latvia and Lithuania. Many audience members who came to the first screening stayed all the way through to the end of the final film, which finished after midnight. The following days also offered an exciting programme of Baltic short films and animations.

On the evening of 30 August the TING hall of the Culture Point was transformed into a theatre for a two-and-a-half-hour performance by Haide Männamäe and Toomas Tross, together with Siim Aimla, of Lauris Gundars’ Piip and Tuut and Hamlet. Performed to a full house, the production included a great deal of very intense scripted text as well as masterful improvisation, and, in turn, playfulness and clever subtext. There was timelessness, there was contemporariness and topicality, and, of course, plenty of Hamlet. The audience was completely engaged from the very first moments of the production – they were enjoying, laughing and constantly mesmerised by the world-class performance of the artists.

The seminar held on 31 August examined the topic of the literature of small and large nations. The discussions raised questions, such as, how well the Baltic readers are familiar with each others’ authors, how much literature is being translated, what are the possibilities to gain more recognition, and how to reach influential international literary events. Sharing their thoughts were authors, translators, publishers, and speakers closely connected to the literary world: Rein Raud and Veronika Kivisilla from Estonia, Renāte Punka and Sanita Muižniece from Latvia and Vakarė Smaleckaitė and Urtė Liepuoniūtė from Lithuania. The discussion was moderated by Tiia Strandén, the director of Fili (Finnish Literary Exchange).

The festival culminated in a jazz concert entitled ‘Nordic Passion’ at the Temppeliaukio church on the evening of 1 September. The performance group comprised five very talented musicians: Villu Veski, Tiit Kalluste and Taavo Remmel from Estonia, Raimonds Macats from Latvia and Valerijus Ramoška from Lithuania. The majestic rock walls of the church witnessed a truly powerful musical event; it was cohesive, borderless, and utterly charmed the audience. The standing ovation at the end of the concert was a testament to how grateful the audience was for such a unique experience.

The entire festival was a great success and it certainly left its mark on the Nordic cultural space – and not just an emotional one.

The festival has since then become a popular talking point. It has also drawn considerable attention to Estonia, Latvia and Lithuania, generated creative impulses, and produced a platform for further Baltic and international cooperation – and with good reason.

‘Estonia, Latvia, Lithuania x 100’ was kindly supported by the Estonia 100 organisation and formed a part of its international programme.

Other important contributors were the embassies of the three Baltic States in Helsinki, Latvia 100, Lithuanian Restored, SVYL, and the Estonian Institute in Finland.

Take a look at the pictures of the poetry night, literature seminar and concert here.