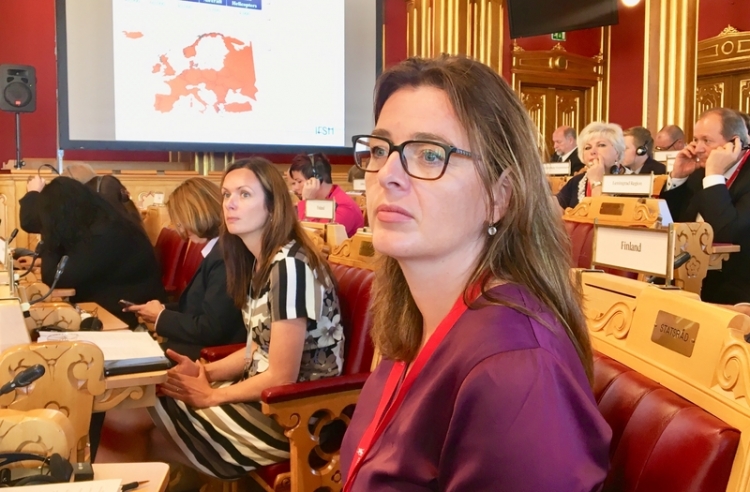 Silja Dögg Gunnarsdóttir (Iceland) is a member of the Presidium of the Nordic Council. Arne Fogt Bergby

Human rights and democracy were key themes at the 28th Baltic Sea Parliamentary Conference (BSPC) in Oslo. The Nordic Council was represented by Silja Dögg Gunnarsdóttir from Iceland.

The guest speaker at the conference was Nils Muižnieks (Latvia), the Council of Europe's Commissioner for Human Rights 2012–2018. The issues he raised included the threat from populist parties and the crises facing human rights at both national och European level, citing Poland, Hungary and Russia as examples of countries where democratic principles are coming under pressure.

Speaking on behalf of the Nordic Council, Gunnarsdóttir stressed Nordic values and the strength of the democratic traditions in all five Nordic states.

“We believe that freedom of expression, a low degree of corruption, a fair and trustworthy judicial system as well as equal opportunities for all, no matter who you love or in which family you are born, are preconditions for strong economies, well-functioning societies and happy populations.”

Gunnarsdóttir also mentioned that the Nordic Council has an international strategy that strives to pay particular attention to areas where the Nordic Region leads the way and can make a difference, for example on rights for children, women, sexual minorities, people of disability and indigenous peoples.

“On Sunday, we agreed on a draft resolution underlining the need for peaceful and close co-operation and neighbourliness based on democratic values, the rule of law, human rights as well as equal opportunities for all. I strongly encourage all of us to make sure that these are not just empty words!” she said.

The Baltic Sea Parliamentary Conference (BSPC) was established in 1991. Its purpose is to encourage political dialogue and co-operation between the national and regional parliaments of the countries around the Baltic Sea.