Celebrating a century of diplomatic relations between Estonia, Sweden, Norway and Denmark 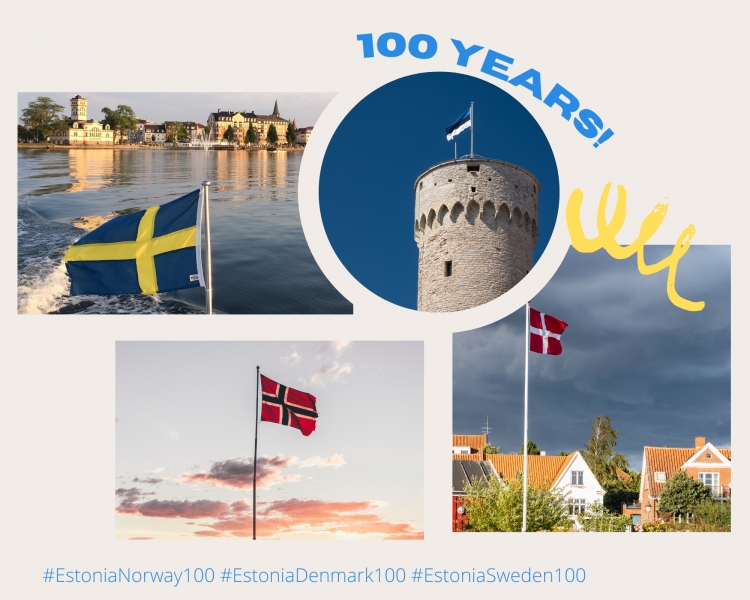 Exactly 100 years ago today, on 5 February 1921, Sweden, Norway and Denmark recognised the independent Republic of Estonia. The decision to do so was made jointly in the capitals of the three Nordic nations.

Norwegian ambassador to Estonia Else Berit Eikeland expressed her delight that bilateral relations between Norway and Estonia as friends and allies remain as strong as ever. “We champion shared values and well-being in Europe and around the world,” she said. “Cooperation between us has been boosted by relations between the Member States of the EU and the European Economic Area, including from the Norwegian support programme, where the emphasis is on enterprise, innovation, scientific research, the climate and support for local development. Today we can say that the environment, health, security and the economy are just some of the keywords we work with on a daily basis.”

Danish ambassador to Estonia Kristina Miskowiak Beckvard says that Estonia has always had close friends in all of the Nordic countries. “Danish soldiers stood shoulder to shoulder with their Estonian brothers and sisters in the Estonian War of Independence a hundred years ago, and we’re still standing with them as part of the NATO EFP Battlegroup in Tapa and on missions around the world,” she said. “We’re alike in many ways, us Danes and Estonians, with very similar interests and values. The battle that now lies ahead of us is for a green and sustainable future. We’re very happy to be working with Estonia towards that and supporting them with our green energy experience.”

The Danish embassy in Estonia is marking the centenary with a high-level virtual event entitled ‘Estonia & Denmark Going Green Together’, which will focus on diplomatic relations and green energy. Speaking as part of this online seminar will be key representatives of both the public and private sectors. The seminar will be taking place from 14:00-16:00 (Estonian time) today, Friday 5 February 2021. The event is open to anyone interested, with the programme and registration available online here.

Swedish ambassador to Estonia Mikael Eriksson says that he is delighted and privileged to be able to celebrate a century of diplomatic relations between Estonia and Sweden, building on more than 800 years of shared history. “For the future, the Nordic and Baltic area has the potential to become a world leader in digitalisation, integration and sustainability,” he said. “We’ll be celebrating this relationship throughout the year and we look forward to many interesting events in the months to come. Today we’re opening an exhibit at the Swedish embassy focusing on the recognition of Estonia’s independence on 5 February 1921, and we’re launching a digital campaign on our social media sites called ‘100 Years of Diplomatic Relations – 100 Stories of Friendship’.”