Unified markings for sorting of waste to be adopted throughout Estonia 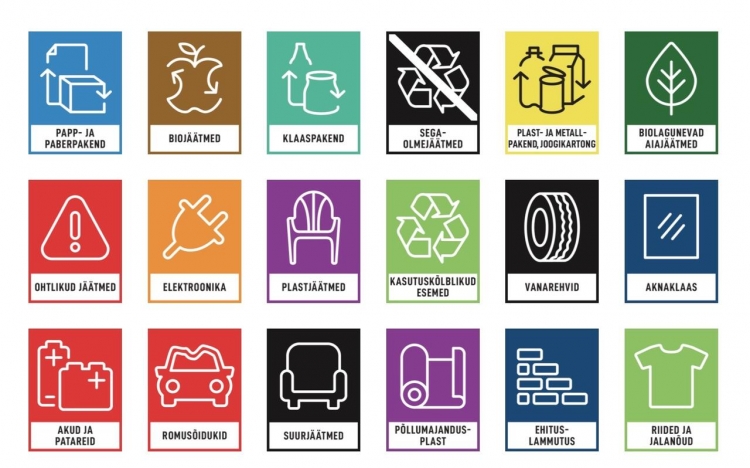 Under the aegis of the Things Foundation, the markings used in Denmark for the collection of waste by type have been analysed to determine which of the 91 pictograms could be adopted in Estonia. The result is a website (www.liigitikogumine.ee) promoting the pictograms, which a number of local governments have already stated they are willing to adopt.

Things Foundation CEO Kristiina Kerge says that since the interest of local governments in the pictograms and their willingness to start using them are so important to the project, it is gratifying that such a high degree of interest has been shown. Among the first making preparations to adopt the markings are the City of Narva, Saaremaa and Saku municipalities, Tallinn Waste Recovery Centre and the NPO Eesti Elektroonikaromu (collecting waste generated from electrical and electronic equipment).

“Together we’ll be able to offer everyone in Estonia easy-to-understand instructions for sorting waste by type,” Kerge said. “The pictograms will make passing on information about collecting waste clearer and will enable information materials and mediums to be planned across countries.”

Deputy-Mayor of Narva Sergei Gorlatš says that the City of Narva decided to join the project because the sorting of waste is such a topical issue. “We feel that by being part of the project we’ll be able to turn more attention to the sorting of waste, make people more aware of it and introduce new types of waste in sorting,” he explained. “We want Narva to be one of the first cities to get involved in this amazing initiative.”

Katrin Koppel, the senior specialist on waste management with Saaremaa Municipal Government, hopes that using the pictogram system for waste collection throughout the country will get the entire population sorting their waste by type. “As a local government, we’ve been trying for years to explain such sorting to our residents, and we still are,” she said. “Now we can use these eye-catching pictograms to do just that, marking all sorts of different types of waste.”

The NPO Eesti Elektroonikaromu likewise decided to join the project so that people would find it as simple as possible in the future to sort their waste by type. “If you have specific symbols for different types of waste that are the same everywhere, that makes it much clearer to people where they’re supposed to take things or put things,” said Aivo Kangus, the chairman of the management board of the organisation. “For us personally, that will mean we’re able to collect old batteries and electronic equipment much more efficiently as well.”

The first stage of the plan being undertaken by Saku municipality is to immediately adopt the pictograms and to order A3-sized magnetic signs featuring them for its household waste recycling centre and for the waste collection point in Kiisa. “A unified system of images will be of help to people whatever waste handling site they happen to be at,” said Saku municipality environmental specialist Kerli Laur. “The pictograms should make it easier for people to bring in their waste, since they won’t have to take a look in the containers any more to double-check what they can throw into them, but simply look for the image they’re familiar with set against a fixed background colour.”

Tallinn Waste Recovery Centre is convinced the pictograms will make it easier for residents of the city to understand the sorting of waste by type. “The first place we’re planning to start using the pictograms is at our waste recovery stations, where clarity of information is very important,” explained the centre’s environmental specialist Sofia Pereskoka.

A cooperation project is being undertaken by the Things Foundation, the Nordic Council of Ministers’ (NCM) Office in Estonia and the Ministry of the Environment to determine whether and how the Danish Pictogram System can be adopted in Estonia. Similar projects are underway in Finland, Sweden, Latvia and Lithuania, while in Denmark itself, as many as 93 of the country’s 98 local governments are using the pictograms. A joint debate between Nordic and Baltic partners on adding the new pictograms to packaging is to be held for the planning of the next stages in the project.

The joint project was launched in Estonia, Latvia and Lithuania in February 2021 and will last for one year. The lead partner in Estonia is the Things Foundation, the team behind which is also known for creating the Kuhuviia.ee site. The project is mainly being financed by the NCM.

The project is designed to share experience and best practice in and promote the use of the Danish pictograms in the Nordic and Baltic region, as well as to encourage the adoption of good waste-handling practices. The project is directly linked to the objective set out in the NCM’s ‘Vision 2030’ action plan of promoting the circular economy and bioeconomy, sustainable and competitive production, sustainable food systems and resource-efficient and non-toxic production cycles.

For further information please contact: Kristiina Kerge This email address is being protected from spambots. You need JavaScript enabled to view it.