The 14 Nominees for the Nordic Literature Prize Focus on Love, Power, and Exclusion 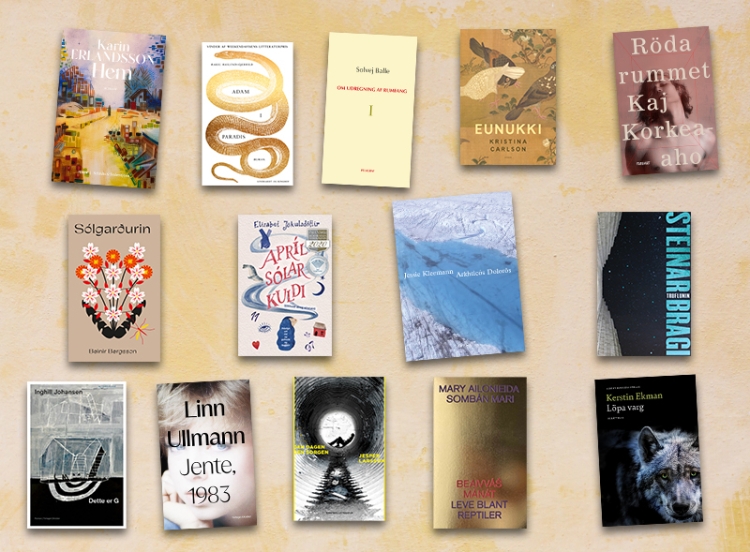 Love, power, and exclusion are among the common themes of the fourteen Nordic novels and poetry collections that have been nominated for the 2022 Nordic Council Literature Prize. This year’s nominees span the entire Nordic Region with works from all countries and language areas. The winner will be announced on 1 November in Helsinki.

This year’s strong representation from the world of fiction breathes sensuality, and the enigma of desire is embodied historically, poetically, and in closed spaces. The nominees also explore natural patterns of life, time travel, and people who find themselves alone, both in prose and enraged poetry. The nominees also deal with Arctic pain and special geopolitical circumstances, as well as changing living conditions that can take unexpected forms, both painful and artful.

Nominees include some that are also known to Estonian readers

Jessie Kleemann, who has vistied Estonia already three times is a poet, dancer and video and performance artist from Upernavik, Greenland. Kleemann gives Greenlandic traditions and beliefs new life in her art. In her work traditional Eskimo motifs meet the globalised present. Mystical natural images collide with real social problems, sea mothers with Brigitte Bardot, dog sleds with 4-wheel drive off-road vehicles. She searches for heritage and identity in the material of the post-modern, creating art in which the beautiful and the ugly do not exclude each other. Kleemann writes in Greenlandic, Danish and English. Her works have been translated into Spanish, Norwegian, Icelandic and Faroese. Her poetry in Estonian can also be found in the poetry collection "Kiirus vaikuse sees" (published in 2006, translated by Kai-Mai Aja).

The poetry collection Arkhticós Dolorôs (2021) (not translated into English) brings together in an excellent way the themes that have occupied Kleemann for the past quarter-century: The abuse of nature by modern humanity, the loss of indigenous culture, and the struggle for a descendant of the Greenlandic Inuit to find a new identity in a modern, globalised present. Symbols, figures and objects drawn from Greenlandic culture are combined with similar objects from far away – in the same way that different languages, especially Greenlandic, Danish and English, are intertwined to form completely new spaces of meaning. In this way, the cultural mix is experienced both as a loss and as a creative invention that takes us to new and unexpected places. The text is saturated with emotion, not least pain and frustration – but out of the pain are born new meanings, images and words that challenge the reader to take part in the exploration of life’s conditions and existence that the poems set in motion. Central to Arkhticós Dolorôs is the suffering, melting Arctic. Jessie Kleemann was one of the first to reinterpret the myth of the Sea Mother as a modern symbol of pollution and environmental catastrophe. In Arkhticós Dolorôs, the figure is duplicated in the form of a “creature of the cold”, the inua of ice and glaciers – a soul or being whose pain is violently reflected back at human beings themselves. Kleemann thus shares with us the experience of an indigenous people of the fundamental dependence of mankind on the surrounding nature of which it is a part – interpreted in a late-modern, globalised present. That is why her texts resonate with so many, and have great Nordic and international potential.

The second familiar name to Estonian readers is Swedish author Karin Erlandsson. Erlandsson is best known as a writer of children’s and young people’s literature. The fantasy world of her Legenden om ögonstenen tetralogy has become internationally renowned. Two of the books, Pärlfiskaren (2017) and Segraren (2019), have been nominated for the Nordic Council Children and Young People’s Literature Prize, as has her advent book Nattexpressen (2020). Her rich output also includes several thriller-like novels.

In Hem, she broadens the register impressively. It can be described as a collective novel, but by the same token it can be seen as a series of short stories that share the same basic theme. Åland’s six-thousand-year history, from the Stone Age to the present day, is concentrated here and shown through a consistent women’s perspective. Erlandsson uses tender and relaxed prose to portray the mothers, who are responsible for all the practicalities in the home while the men are usually working at sea and away for months or years on end.

Erlandsson is no stranger to a harsh reality and ventures far beyond depictions of an idyllic archipelago. She writes with realism, without any prettification, which is what makes the text so credible. The novel uses its linguistically masterful style to pay tribute to an insular world, to a pattern of life close to nature where women bear the ultimate responsibility for the workings of day-to-day life.

More information about all 14 nominees can be found here