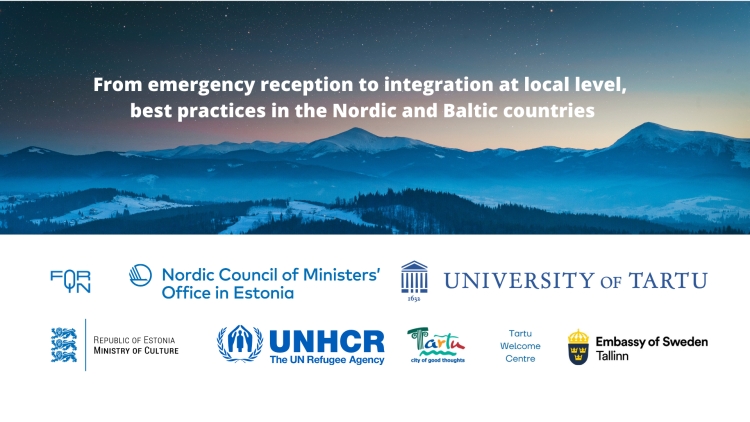 The conference on “From emergency reception to integration at local level, best practices in the Nordic and Baltic countries” will take place in the Estonian National Museum, Tartu, from 11–16 on 27 May. The conference will be in English and can be attended on-site or virtually.

The conference will take place in the framework of the FOR-IN project of the Nordic and Baltic countries for 2022–2023. The objective of the project is to support the local integration of refugees and migrants through country-specific cross-sectoral cooperation models and the creation of a network of professionals in the North-Baltic region.

“Modern Europe, and the world, has been plunged into a crisis that many of us could not have foreseen a year ago,” said Director of the Nordic Council of Ministers’ Office in Estonia Christer Haglund. “Millions of people have been forced to flee their homes and resettle either in their own country or to flee to other countries because of the war in Ukraine.”

There are currently more than 280 million refugees in the world, comprising around 3.6% of the world’s population. According to the International Organisation for Migration (IOM), more than eight million people have fled their homes in Ukraine as of May 2022 due to the war initiated by Russia.

“In the middle of Europe, the disaster and humanitarian crisis in Ukraine is getting worse and the number of people affected by the war is growing rapidly,” said Madis Kanarbik, Manager of the Nordic Council of Ministers’ Branch Office in Tartu. “None of us could have predicted such a situation when, in 2021, we started planning a joint Nordic-Baltic project to support the integration of migrants in our region. But there is no doubt that we now have to cope with this new reality.”

Speakers from Denmark, Estonia, Finland, Iceland, Latvia, Lithuania, Norway, Sweden and Finland will gather in Tartu on 27 May to share their home organisations’ practical knowledge and experiences of integrating refugees. The conference will be opened by Mayor of Tartu Urmas Klaas, Estonian Minister of Culture Tiit Terik and Director of the Nordic Council of Ministers’ Office in Estonia Christer Haglund. Professor Tiit Tammaru from the University of Tartu and Professor Christopher Jamil de Montgomery from the University of Copenhagen will speak. The speeches will be followed by discussions, the results of which will be summarised by Piret Hartman, Undersecretary for Cultural Diversity at the Estonian Ministry of Culture. The conference will be moderated by Karolis Zibas, Integration Officer in the Nordic and Baltic countries for the United Nations High Commissioner for Refugees (UNHCR).

The project has been prepared and launched by the Nordic Council of Ministers’ Offices in Estonia, Latvia and Lithuania, the United Nations High Commissioner for Refugees (UNHCR), the Ministry of Culture, the Ministry of Education and Research and many other partners.

Registration for the conference