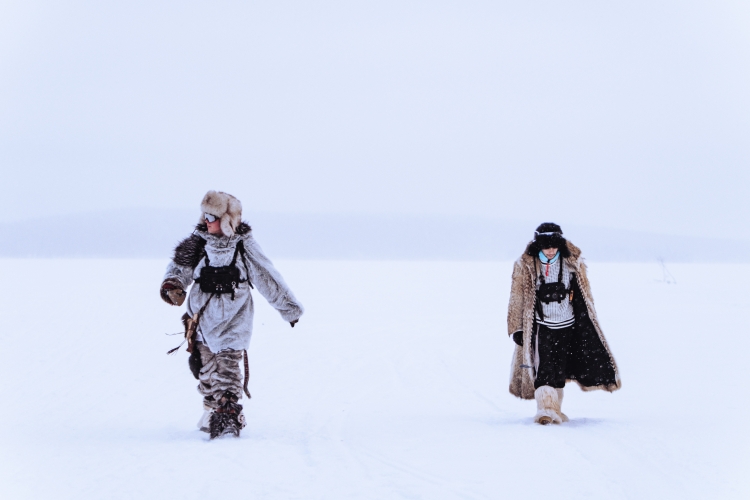 What kind of world do we want to leave behind for future generations? Will our kids even be able to lead normal lives on the planet? Rappers Mikael Gabriel from Finland and nublu from Estonia share concerns about Earth’s future, which is why they responded to the call put out by the Estonian office of the Nordic Council of Ministers (NCM) to get their message across to the youth through their music. They teamed up to release the hit single Vihje (‘Hint’) on the last day of 2021.

We asked Mikael Gabriel (MK) and director of the Estonian office of the NCM Christer Haglund (CH) how the idea for the collaboration came about and what it all led to.

Let’s talk about you working together. How did it come about, and why MK and nublu in particular?

CH: Sustainability is one of the things we value most at the NCM, which is to say ensuring that in the future our children, and our children’s children, still have a decent world to live in. How can we get people to curb their consumption and understand the consequences of the choices they make? We’d already worked with the popular TV series Padjaklubi (‘The Pillow Club’) to try and speak more directly to a younger audience.

The girls on the show talked about issues that are important to us, and we made a video with them that proved really popular – it ended up being watched by more than 600,000 people. That said, it was pretty one-sided, as it was mostly female viewers. So then we started thinking about who we could get on board to grab the attention of boys and young men, and rap seemed to be the obvious route to go down.

I’d been a fan of nublu’s since I first came to Estonia. He wasn’t as much of a big name at the time, but I liked what he was doing – both his songs and his lyrics. So I got in touch with him, and to my delight he said yes straight away! Vihje has turned out to be really popular as well – it’s made it to more than 100 countries and is up to more than three quarters of a million views on YouTube. Plus there’s the making-of from the filming of the video, which has been watched 25,000 times.

MK: Nublu and I wrote Vihje together, so I was totally up for getting involved. He and I had worked together before, so we wanted to make it as good and ambitious as everything else we’d done.

You filmed the video in Northern Finland. How extreme were the conditions up there?

CH: Yes, it was up in Lapland. I went along myself to watch the filming – I was fascinated by the whole process of making the video. There was a more than 20-strong crew working on it from Estonia; a really big group. I was impressed by how professionally they went about it. Shooting days lasted from the early morning through to late at night, every day. It was a lot of work. And the conditions weren’t easy either – it was incredibly cold.

MK: Yeah, it was freezing. We were filming in Lapland in the middle of winter, which has got to be the coldest time of year in the coldest place on Earth! And we didn’t really have anywhere we could warm up. The lakeside cabin we were in was so cold that I was shivering the whole time. It was the kind of cold that got into everything. Even the snacks the caterers provided ended up frozen. I picked up this banana that was so hard you couldn’t even bite into it! 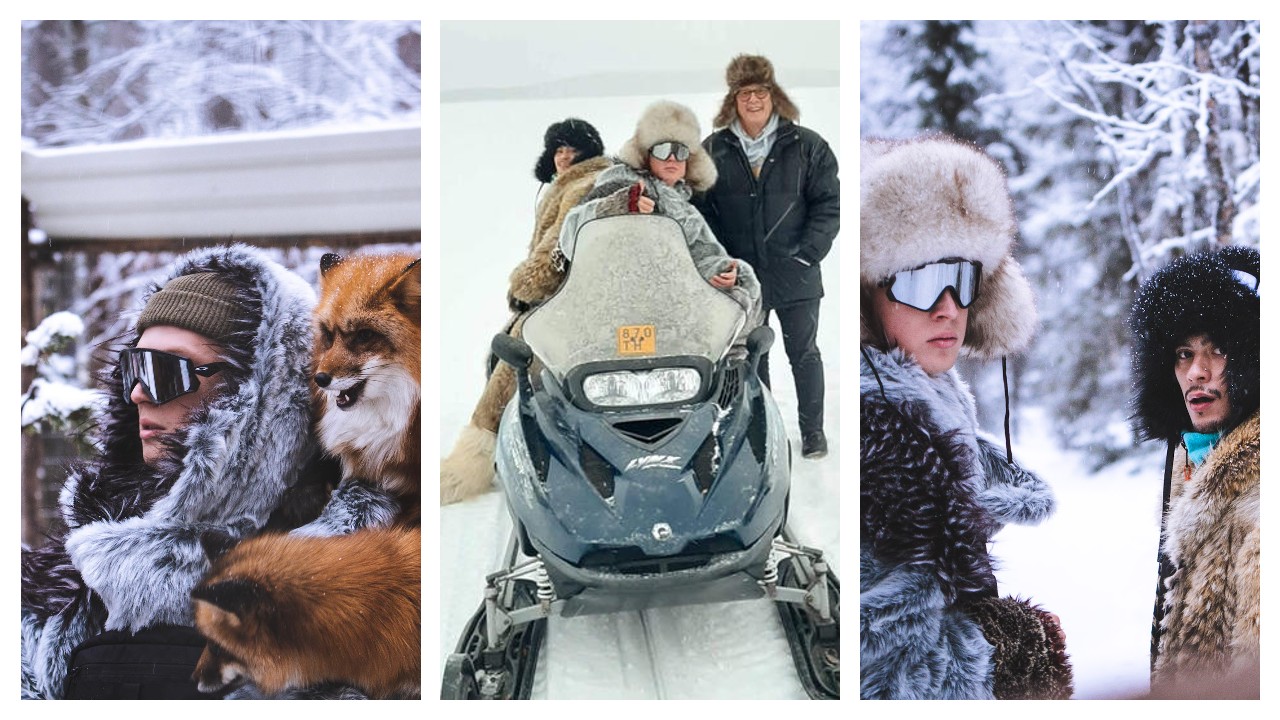 What else do you remember from the filming days? I’m guessing you still had fun, despite the cold.

MK: Oh, definitely! The ideas we’d come up with for the video were really funny, so yeah, we laughed a lot on set. We got a really well known Estonian actor, Indrek Taalmaa, to play Santa for us. He’s legit one of the funniest guys I’ve ever met. He was constantly making jokes, and I had some hilarious conversations with him. I think it’s fair to say I made friends with everyone on set during the few days we worked together.

In your experience, does the green transition and the constant talk of consuming less and environmentally friendly ways of life actually resonate with young people or is it falling on deaf ears?

MK: I think it resonates with them, sure. Even more so than it does with older people. Kids are often more aware of the state of our planet than their parents are. They get the need to recycle, that it’s important to protect nature and animals and waterways, plus the water that’s in the ground, so we have enough of it to drink. I know loads of young people, especially in Finland, who are really clued up on the environment and green energy.

CH: I can only echo what Mikael’s said: the younger generation are very much aware of all these things, and I hope there’s a sort of reverse osmosis and that they pass on to their parents that we need to be reducing the amount of pollution we’re creating and be more sustainable. Nobody’s against the idea of a better future, but there are plenty of people who are doing nothing to secure it and need to be nudged in the right direction – informed about what they can do for the good of the environment.

Just how bad are things, really? Is there still time to change people’s behaviour or have we become such creatures of habit that that ship has well and truly sailed?

CH: The environment’s such a delicate system that no one can say with 100% certainty how it all works. But we do know that if we carry on the way we are, the damage it’ll cause will be irreversible. Which is why it’d be so stupid if we just did nothing and carried on regardless, only to turn around in 10 years’ time and say, “Oh, if only we’d done something, things would be better now.”

And that’s why each and every one of us has to do what we can. We all want to live in an world that’s as unsullied as it can be. We all want to make the right choices. It’s a question of how much we’re willing to do. That’s why you have to get everyone on board, everyone contributing, without exception. That’s the only way change is possible.

MK: To me it’s all about education. If we educate people, especially young people, and share what we know with them about the environment and green energy and stuff, then change is possible. But the world’s so divided, and the level of education in second- and third-world countries isn’t that great.

That’s why things are being done in places like India that just aren’t sustainable from the point of view of the planet. I mean, look at the number of people who live there – if they threw their lot in with Europe in the fight against climate change, then perhaps there’d be untouched nature and fresh water for future generations to enjoy as well. But it’s not just them who need to change their ways – it’s everyone, from every country. We have to find new forms of technology and new ways of obtaining energy, producing fuel for our cars, that sort of thing. I really, honestly believe we’re capable of change, but there’s still a lot of work for us to do, and it all starts with education.

What do you yourselves do for the good of the environment, and for a better future?

MK: I have my own garden where I grow my own stuff, and it’s full of flowers and bees and other insects. I live in the middle of the forest and go walking in it every day. That’s how I recharge my batteries, by walking my dog in the forest. I really love it. And I’m all for recycling. Oh, and I have an electric car!

CH: I’m a big recycler, too. We sort all our waste at home, which is heated geothermally, and which has its own little garden. And I drive an electric car as well. One thing I’ve been doing in recent years too is really cutting back on the amount of red meat I eat, even though I’m not a vegetarian. And I opt for local produce whenever I can, because that reduces my ecological footprint.

I’m travelling less these days as well, taking shorter breaks instead of making bigger trips and staying longer wherever I go. While I’m there, I put my money into local businesses so they have the chance to invest in a more sustainable future as well. Oh, and I’ve never been much of a clothes buyer, but when I do buy them, I go for higher quality that will last longer, because the fashion industry’s one of the biggest polluters on the planet. All of these things require a bit of thought, but they’re quite fun in their way.

So where should people start? What are the easy little things everyone can do for the good of the environment?

MK: Like I said, we need to be educating people. We need to be setting up schools in third-world countries where education’s not available to everyone, and sending teachers to them. The problem, as I see it, is that up here in Northern Europe we’re doing pretty well for ourselves – we basically know what we have to do for a better future, and we’re more or less already doing it.

But in third-world countries there simply aren’t any waste-sorting systems or recycling systems, and there’s not even that much clean water. The only way to change that situation is with a new generation of educated people. Here at home, I always tell people they should eat stuff from nearby farms if they can and invest in sustainable products.

CH: One really good recommendation is to check before you buy something whether it’s got an ecolabel. The Swan ecolabel is used in the Nordic countries and Baltic States. It can be obtained for things that have less of a negative impact on the environment throughout their life cycle than other products and services designed for the same purpose which don’t have an ecolabel. There are other EU ecolabels you should keep your eye out for as well. And if what you’ve picked up doesn’t have any ecolabel on it, then you might want to reconsider buying it. That’s an easy starting point.

See the “behind the scenes” documentary here.