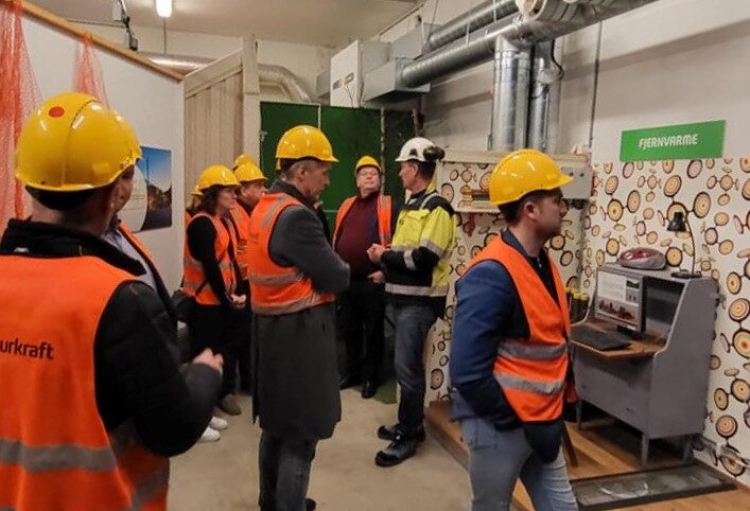 Although the pandemic seems to have resulted in a new normal whereby most meetings and get-togethers are held online, the Mobility and Network Programme for Public Administration run by the Nordic Council of Ministers (NCM) offers public-sector workers opportunities for cooperation, encouraging them to meet and share their experiences face to face. Over the years, more than 4000 officials from the Baltic States and Nordic countries have undertaken study trips abroad with the support of the programme.

The mobility programme was primarily launched for the exchange of knowledge and experience, to strengthen cooperation networks and to boost the global competitiveness of the Baltic Sea region. The project is open to both groups and individuals from the public sector.

Sven Hõbemägi, the director of the Association of Local Authorities of Lääne-Viru County, says the programme has been a great opportunity to learn from outside experience on issues that have been in focus in the county at different times.

“It’s enabled the heads of the local governments in our county to go and see how others are handling issues like security or immigration and integration,” he explains, adding that the programme conditions are relatively flexible and that the implementation team is very responsive and easy to deal with. As a result, lodging applications, carrying out projects and completing the subsequent reporting are not complicated in the slightest.

The aim of the ‘Role of and options available to local governments in achieving climate and energy goals’ project was to soak up knowledge of renewable energy and green issues at the local level. “As part of the mobility project, we paid a visit to Eurajoki local government in Finland and the Agder region in Norway, which has been a sister district to Lääne-Viru County for more than 20 years now,” Hõbemägi says.

The trip obtained the funding it needed back in 2020 but had to be postponed (and the project itself extended) a number of times due to the pandemic. In the intervening period, green issues began taking on greater importance in Estonia, and the county started drawing up its own climate and energy plan.

“Since we also got Agder on board in drafting the plan, the project the NCM financed was a great chance for us to integrate it into our study trip,” Hõbemägi explains. “As such, within the framework of the mobility project we were able to focus on green issues more broadly, taking in the process of drawing up the climate and energy plan as a whole in addition to renewable energy solutions.”

A busy visit results in a better experience

The trips undertaken by the Lääne-Viru officials to Finland and Norway involved hectic schedules. In the course of the visits they looked at matters surrounding sources of renewable energy and touched on issues of political debate pertaining to the involvement of ordinary people, awareness-raising and renewable energy solutions.

“Since we’ve only put together about half of our plan at this point, there’s no doubt that the experience we gained abroad will help us to better understand climate and energy issues and therefore make our development document more meaningful,” Hõbemägi says. “We got tips on what to take into account at the local level going forward in terms of the development of the county, and on the potential green pilot projects we can press ahead with together based on outside experience.”

Since all eight of the local governments in the county were included in the programme, they gained a shared understanding of the issues, which will make reaching agreements in future much easier. Both visits confirmed that getting the local community involved in the process at the right time, and thereafter consistently, helps a great deal in alleviating their concerns regarding the establishment of wind farms and nuclear power plants.

“There’s been talk of building a modern nuclear plant in Estonia as well, with suitable locations being suggested, including in our county,” Hõbemägi says. “One of them is Kunda in Viru-Nigula municipality, but whether anything comes of it is down to the government. During our trip to Finland we visited the Olkiluoto nuclear plant, where we learnt that every effort is made to ensure safety when setting up modern plants like it.”

Hõbemägi says it is natural for people to still have misgivings: even in Finland and Norway, where wind and nuclear energy have been utilised for many years and you would expect all fears to have been overturned, this is not always the case. Differences of opinion still arise between the state, local governments and local communities, as do points for discussion and problems to be solved.

Hõbemägi is convinced his county has a lot to learn from everything they experienced on the trips. “Compared to Finland and Norway, we’re taking baby steps where these issues are concerned,” he admits. “One of the interesting things we found out about on our trip to Finland was that in finding suitable locations for wind farms, the Finns are testing an innovative new bird radar system they’ve developed themselves that allows them to analyse the movement of birds along the coast so that wind turbines at sea don’t pose a threat to already endangered species.”

Hõbemägi encourages everyone to take part in the programme, since it is very flexible and smoothly organised. “It gives you the chance to create added value for local development based on outside experience,” he says. “As part of the programme we’ve also taken on the role of host and sharing our experience with others. For example, we’re hoping we’ll be visited before too long by our Swedish partners in the mobility project focussing on the objectives of Agenda 2030.”

Martin Vorkinn, an adviser to Lesja municipal council in Norway, visited his colleagues in Marijampolė (Lithuania), Valka (Latvia) and Tartu (Estonia) with the support of the programme.

The aim of the ‘Effective work routines and best practice in the administrative work of local governments’ project was to exchange knowledge, experience and best practice, such as how to delegate authority and responsibilities, get locals involved in decision-making processes and organise personnel work. It also looked at how to achieve mutually beneficial results when dealing with other local governments and how to establish well-functioning cross-border networks in order to work even more effectively together in the future.

Vorkinn says that taking part in the project gave him the opportunity to implement new methods in his work and to streamline existing practices. He considers the contacts he made and relationships he forged equally important, as these have gone from strength to strength in the course of the project and may also prove beneficial in other areas in the future.

“The project lived up to my expectations, definitely,” he enthuses. “The site I lodged my application on and later submitted my reports to was really clear and easy to use. I honestly only have good things to say about the project! Given how things are in the world at the moment, cross-border programmes and projects like these are more important than ever.”

Valuing the experience of Swedish and Norwegian colleagues

Kaie Nurmik, an expert with the Ministry of Economic Affairs and Communications, has been on two study trips with the support of the NCM programme: one to Sweden and one to Norway. “Green issues are really pressing right now, and that’s what we set out to find out more about,” she explains. “The Nordic countries are at the forefront on all things green, and we have quite a bit to learn from them.”

The other aim of the trips was to learn more about getting stakeholders involved. “We often have problems with that in Estonia,” Nurmik concedes. “Like when putting together the forestry development plan – the state does invite entrepreneurs to a round-table, but the entrepreneurs complain that they’re still not listened to.”

Like Vorkinn, Nurmik says that participating in the NCM programme is simple: you merely have to ask. “What’s important is that you have to have someone to host you in the country you’re going to and act as guarantor for your visit,” she explains. “And of course you need to come up with a good programme for your trip that will allow you to cover as many bases as possible.” Nurmik was joined on her trip to Sweden by people involved in the processing industry, who also joined her on her visit to Norway, this time also accompanied by an energy specialist.

Nurmik feels both trips were very worthwhile for the knowledge they imparted. “One of the things we learned about in Sweden was the green requirements production companies implement in the country,” she says. “Since Sweden is such an important export partner to Estonia, our producers have to take those requirements into account as well.”

In summary, Nurmik describes such trips as having great practical value: not only do you learn through experience and gain knowledge you can pass on to others in your own country, but the contacts you make can prove highly valuable. “If I ever need help or advice from Nordic colleagues in the future, then I now know who I can turn to,” she says. “And even if they themselves can’t help, they know me well enough to recommend someone else to talk to.”

More information on the Nordic-Baltic Mobility Programme for Public Administration can be found here.