Time’s running out: The Nordic-Baltic Mobility Programme is set to allocate ‘school money’ once again! 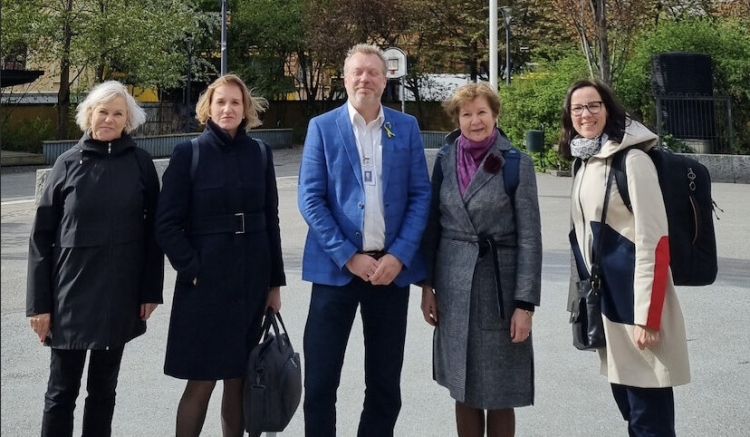 The Ministry of Education and Research visited Celsiusskolan in 2021 as part of the mobility program and met with its director Jorgen Norman (pictured in the middle). According to the adviser to the Ministry of Education and Research, Maie Kitsing (second from the right in the picture), it was a very informative meeting. Maie Kitsing/ private collection

This September marks more than just the start of the new academic year: the Nordic-Baltic Mobility Programme for Public Administration has launched its autumn round of applications, enabling public-sector workers to apply for support with which to share ideas and experience with their Nordic and Baltic colleagues. “Nordic solutions to education issues have given us ideas on how we can widen our bottlenecks, like supporting schools whose students are faring more poorly and issuing training permits,” explained Maie Kitsing, an adviser to the Ministry of Education and Research who visited Denmark within the framework of the project.

The programme’s spring round of applications saw 179,152 euros allocated to 23 projects, in which 163 public-sector workers from the Nordic countries and Baltic States are participating.

The programme aims to foster and support cooperation, the exchange of experience and the strengthening of networks between public-sector workers in the Nordic countries and Baltic States at all levels of administration. Its target is the development of efficient working methods.

With the programme’s support, the goal is to boost the global competitiveness of the region as a whole. Almost 700 projects involving more than 4000 public-sector workers have been co-financed by the programme to date.

The programme allows officials working at the state and local government levels to apply for support for study visits to the Nordic countries and Baltic States.

An eye-opening trip to Denmark

Maie Kitsing, an adviser on education management and teacher policy to the Ministry of Education and Research, was closely involved in a school education and education innovation project which took place in spring 2021, as part of which she visited Denmark. She says the project identified a number of similar approaches in the development of the Estonian and Danish education systems.

“Our ministry was really inspired to learn about the development of a similar system and the Danes’ views on what was working for them and what wasn’t,” Kitsing said. “Their thoughts on self-assessment by schools and their managers was particularly interesting.” Further cooperation is planned in the form of online meetings, with the Danish experience being taken as an example to follow in improving Estonian education.

Kitsing also visited Sweden and Finland as part of the project. In the former, she and her colleagues discovered that Swedish school managers take a systematic approach to dealing with schools whose students are faring poorly. This knowledge is sure to help in supporting such schools in Estonia. “We’re planning to ask our colleagues from Uppsala to outline their approach to the team behind the new ERDF general education quality programme,” she said. 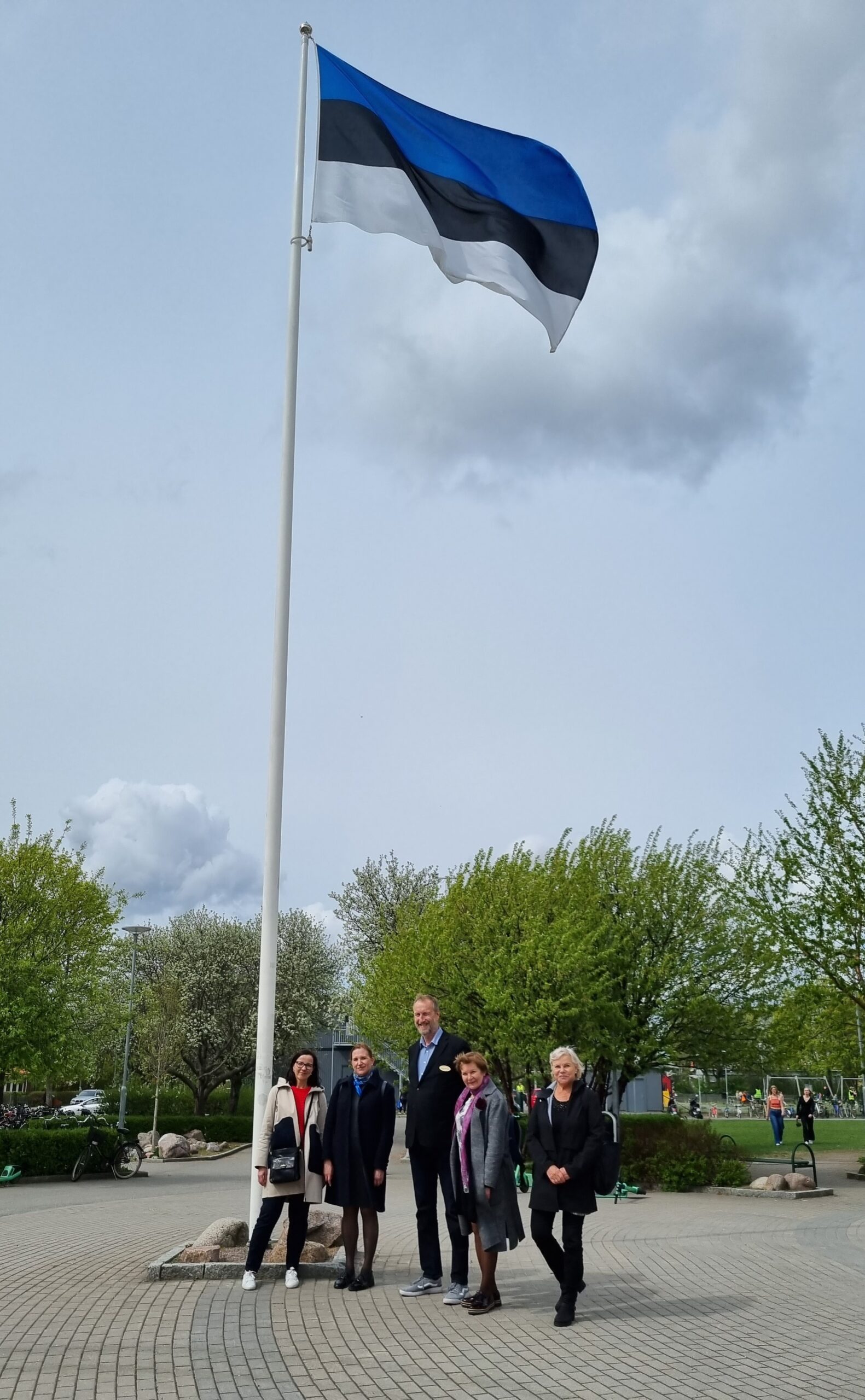 Employees of the Ministry of Education and Research also held the Estonian flag high during the meeting with Henrik Ljungblom, director of Nannaskolan. Photo: Maie Kitsing

The trip to Finland, says Kitsing, reinforced how important it is to have trust in the education system. “We saw some brilliant cooperation between school managers and schools and some great approaches that could work in Estonia as well in improving cooperation between schools, managers and parents,” she explained. “For example, there was a school director in a little country town who also served as an adviser to the local government.”

The Ministry of Education and Research and its partners identified a number of universal issues and bottlenecks in the course of the project. They now plan to share their experience so as to find the best ways of supporting weaker schools.
Since the provision of high-quality education is such a hot topic at present, Kitsing is sure that cooperating with the Nordic countries on data-based management will support education-based technological innovation in Estonia as well. “Our trip showed that we face the same sort of problems and that we should be working more closely together,” she said. “Thankfully, the relationships we’ve built up support that.”

Aire Koik, an adviser on communications to the Ministry of Education and Research, added that the programme represents an excellent opportunity to learn about other countries’ education systems, get to know colleagues, exchange experience and learn new things.
“Most of our interaction over the last few years has been virtual because of the pandemic, but meeting people from networks and colleagues from the fields of education and research face to face is a much more effective form of international cooperation,” she said.

Koik added that regional cooperation is important because countries face a number of similar issues. “Study trips are motivating as well, since on them you often come up with innovative new solutions and opportunities to work together,” she explained.

In Kitsing’s view, the programme fully met her and her colleagues’ expectations. “The pandemic did scupper our original plans, but everything worked out okay in the end,” she said. “We were able to meet quite a few of our colleagues who contributed to education reforms and future initiatives. Nordic solutions to education issues gave us ideas on how we could widen the bottlenecks we’re faced with, like supporting schools whose students are faring more poorly and issuing training permits.”

The next round of applications is now open

The programme is open to public-sector workers from the Nordic countries and Baltic States at all levels of administration: state, local government and local authority unions.

The online system for the submission of applications this autumn (www.nb8grants.org) has been open since 15 August. The deadline for applications is 31 October. More information about the programme, including its terms and conditions, can be found on the website of the Estonian office of the Nordic Council of Ministers (NCM).

Success stories related to projects co-financed by the programme in previous years can be found on the NB8grants website.

A good example is the ‘Intelligent Nordic-Baltic Ecosystems (INBE)’ project initiated by Vänersborg local government in Sweden, which was allocated support in 2021.

Vänersborg development manager Stefan Konjevic says the project revealed the effort their Baltic partners have gone to in digitalising public services. “It’s a great basis for further cooperation with them,” he said. “Sharing experience and issues that have been faced has been really useful for us, and has inspired us to continue developing new working methods.”

The project had a number of aims: to exchange experience in regard to inclusive, user-friendly digital services in the public sector; to examine the impact of inclusive budgeting on local development; and to discuss new digital solutions and services, including opportunities to use mobile positioning in the organisation of public transport, all so as to boost local governments’ ability to restore the post-crisis economy.

Meetings with partners were held in both Daugavpils and Tartu, in the latter of which the local government organised a seminar on 24 August entitled ‘User-friendly digital services designed for the public’.

The ‘Nordic future economy’ blog is supported by the NCM and the Embassy of the Kingdom of Norway in Estonia.