Undressed at home while dressed online? 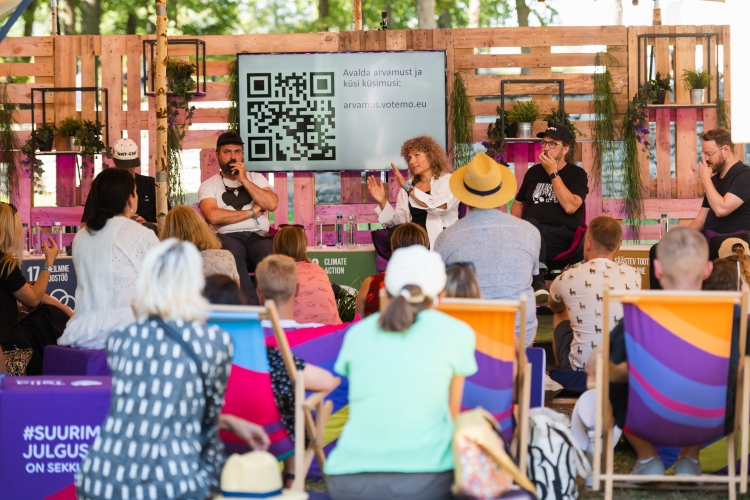 Fashion designer Xenia Joost describes a new phenomenon that is leading the fashion industry to new and exciting territory that’s straight out of science fiction.

The zone dedicated to Digital Knowledge at the Opinion Festival held in Paide predominantly focused on the digitisation of art and culture which has also caused fashion to pivot in a whole new direction. So, how can a regular person use digital fashion to dress themselves and what does it all mean? Xenia Joost provides some insight.

The panel ‘Navigating next-gen technologies for culture’, held in English, was mostly concerned with the revolution of digital art. The panel was organised by the Council of Nordic Ministers’ office in Estonia. The purpose of the panel was to bring people closer to the Nordic view on culture and digital art in particular. From a broader perspective, the panel aimed to look at the fundamental paradigm shift we are witnessing in culture with the involvement of technologies characteristic of the digital age.

Fashion designer Xenia Joost said at the panel discussion that even though fashion is very trendy and always endeavours to stay one step ahead, the industry is lagging behind in terms of digitisation. There are, however, a number of ways to approach this. One is cutting production and costs. “Many fashion houses are moving towards digitisation, many initial samples are made digitally, for instance. They check the fit on persons and then decide whether the item goes into production.

Joost pointed out that digital fashion creation started 2-3 years ago without the purpose of making it into real and tangible products. “A lot of creatives started to play around with these ideas and now there are many so-called fashion entrepreneurs who specialise in creating only digital clothing. I gave it a try during the first Metaverse fashion week, where a digital avatar was used to try on different clothing items,” said Joost of her experience. 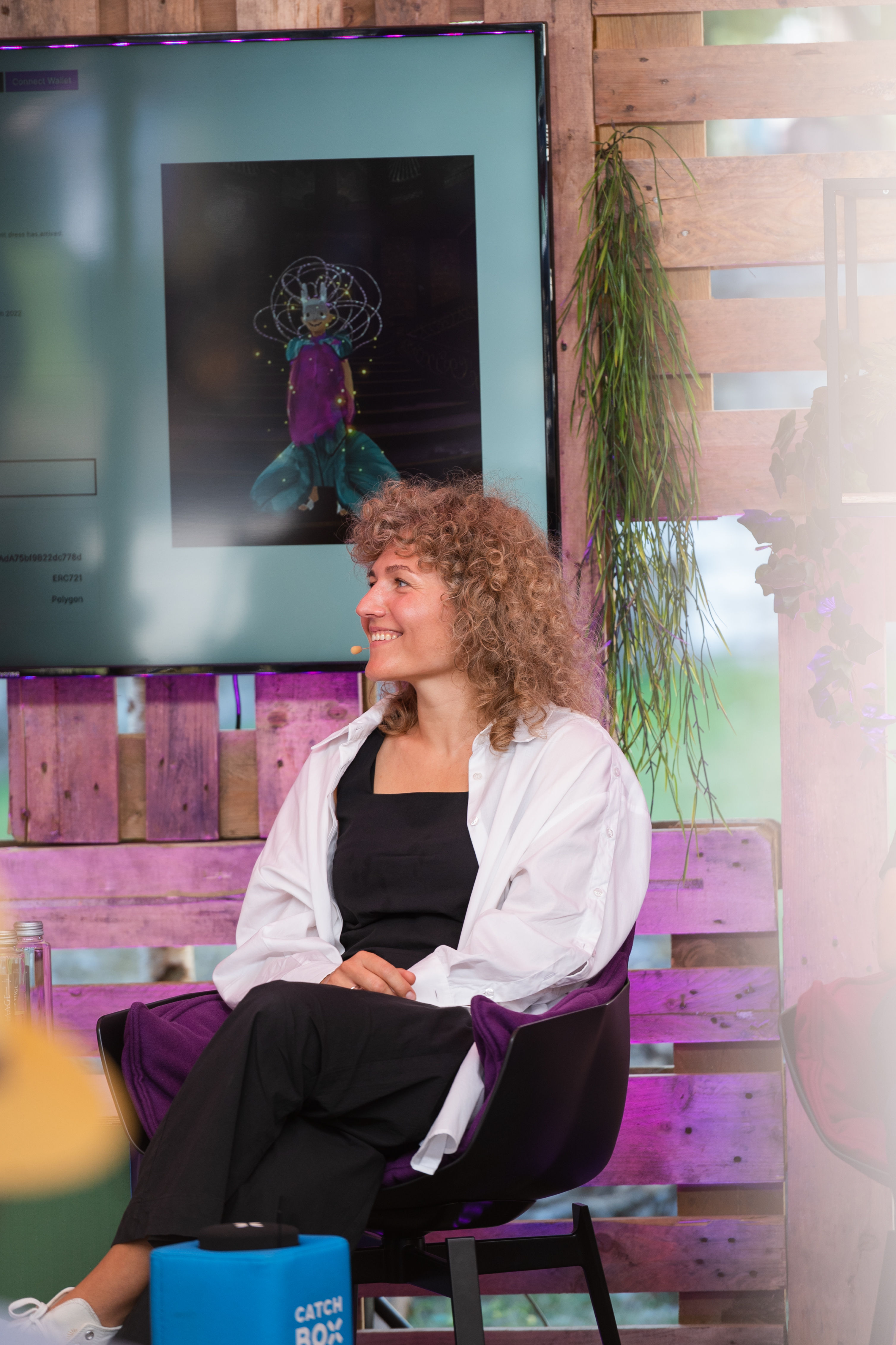 The screen behind Xenia Joost shows the digital dress she created that can be fitted to your avatar. Photo:Jana Laigo, Barefoot Studio

Sci-fi fashion week in the Metaverse

The first Metaverse Fashion Week kicked off on 24 March this year and featured 60 participants. These included luxury brands, one of the most famous names being Dolce&Gabbana, as well as smaller creators and digital designers. The fashion week was held in a virtual environment known as Decentraland.

As a large Metaverse platform, Decentraland offers unique opportunities for learning and enjoying virtual experiences. Users can buy and sell virtual land plots with assets such as names and avatars using the Decentraland Marketplace.

“There are actually several aspects to consider with this fashion week. One is certainly the platform itself where the event was held. A lot of preparations went into that. The event featured different companies that presented a range of exciting aspects for consumers. They can walk around in a virtual shop with their avatar and buy digital items from clothes to jewellery,” said Joost.

Preparations made by the creators and individual designers who took part in the event included the production of models. All designs were made digitally and then converted into digitally wearable items. “That means I start by creating a very high-resolution virtual garment that can then be put into motion. In the Metaverse, however, the item has to be low-resolution and quite pixelated.”

All the clothes and jewellery created for Metaverse Fashion Week were also available for purchase with digital money. “Since the items could be bought before the fashion week started, people who were in the audience with their avatars were able to wear them during the fashion week.”

The fashion week was made possible thanks to new and exclusive technology that converts 2D product images into 3D experiences. This way, all participants were able to buy and try different virtual clothing items in the virtual Decentraland environment and also get them for their virtual wardrobe if they so wished.

Joost offered dresses to customers during the digital fashion week. “It was interesting to see how the people who purchased a dress also got shoes and jewellery to go with it. You can see your digital creation take on a life of its own outside the real world,” said Joost.

This type of digital dressing is comparable to dressing up your avatar in computer games. Plenty of parents are aware of this courtesy of their children who ask for money for a new chick suit or a sombrero for their digital heroes. 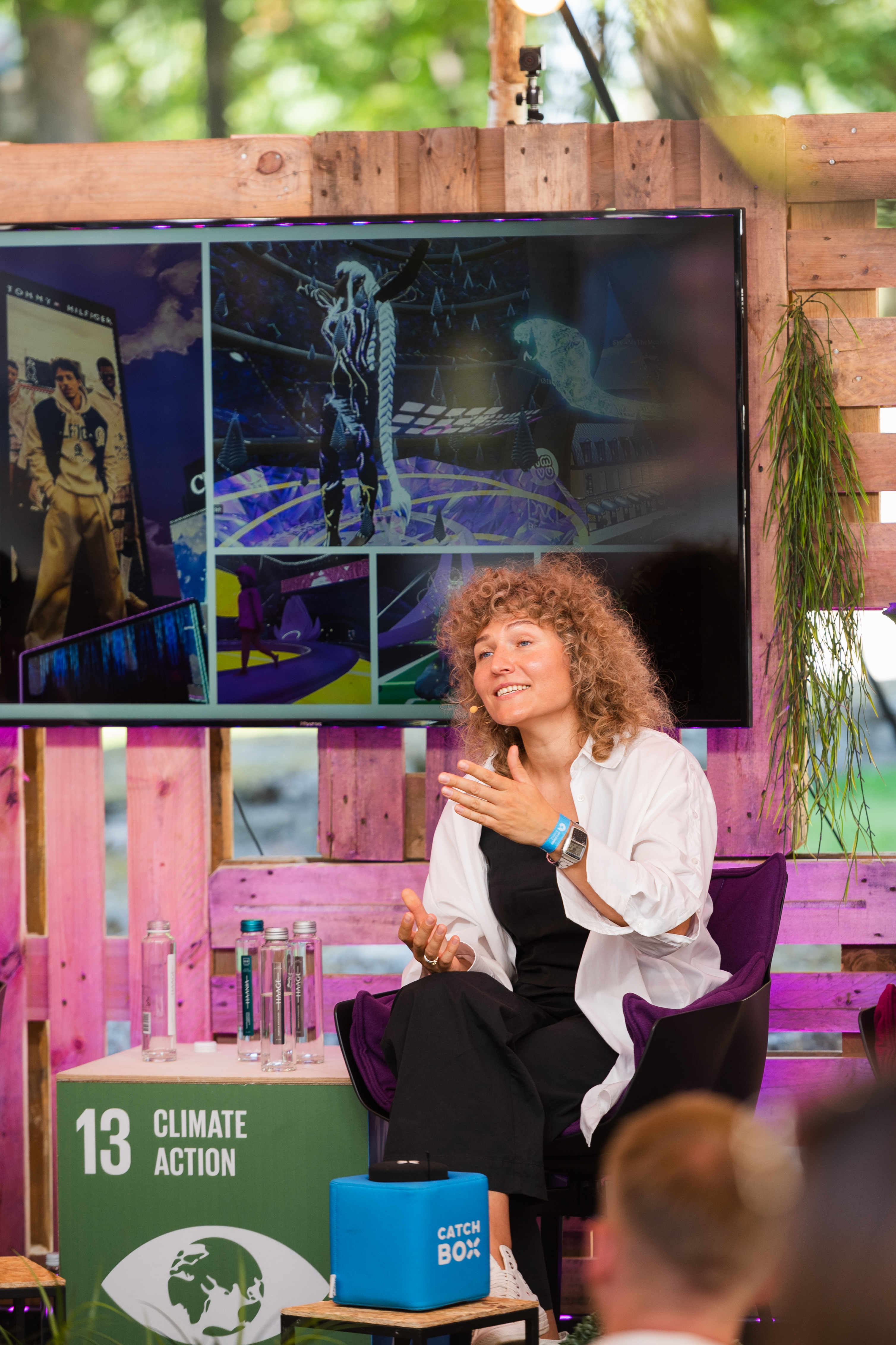 Could we end up with more clothing items in our digital wardrobe than our actual wardrobe? In her reply, Joost referred to a related study conducted among gen Z.

“These young people predicted than in about five years’ time, they would have more clothes in their digital wardrobe than their physical wardrobe. Looking at my own children who also spend a lot time playing computer games, they too have quite a lot of digital clothes they buy in-game. It seems to me that physical clothes currently still outnumber the digital ones.” 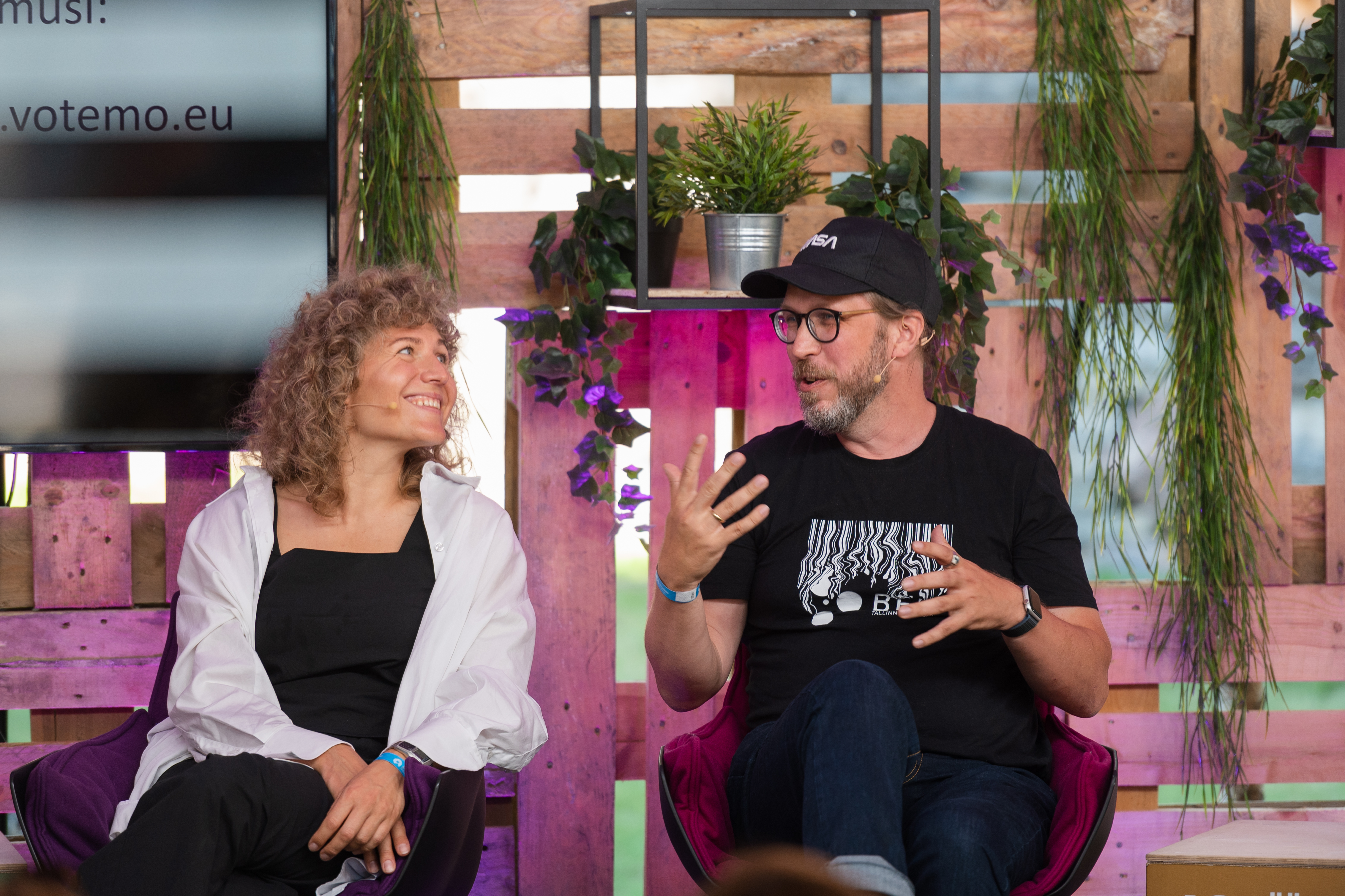 Are virtual wardrobes destructive to our identity?

Professor Indrek Ibrus of the Baltic Film, Media and Arts School raised the question of whether having a virtual wardrobe could mean than people start to present themselves as different personalities in different situations.

Joost did not consider that to be a problem, saying “I don’t consider the risk to be any greater with digital fashion because people are different in the same way in real life. After all, in different situations we all have different roles. I’m not the same person at a formal event as I am when having a cup of tea with my mother on a Friday night.”

According to Joost, fashion is a visual language and digital fashion helps make it even more playful.

Joost also says that digital fashion reduces consumption because you can simply resort to digital fashion for a cool Instagram photo or a fashionable outfit for a video meeting. “This means you don’t need to go to the store physically to get something new. You can wear that digital costume just one time for a photoshoot,“ says Joost to describe her vision.

“In a few years’ time, we might all be sitting here as a virtual panel in extravagant clothing,” Ibrus added. 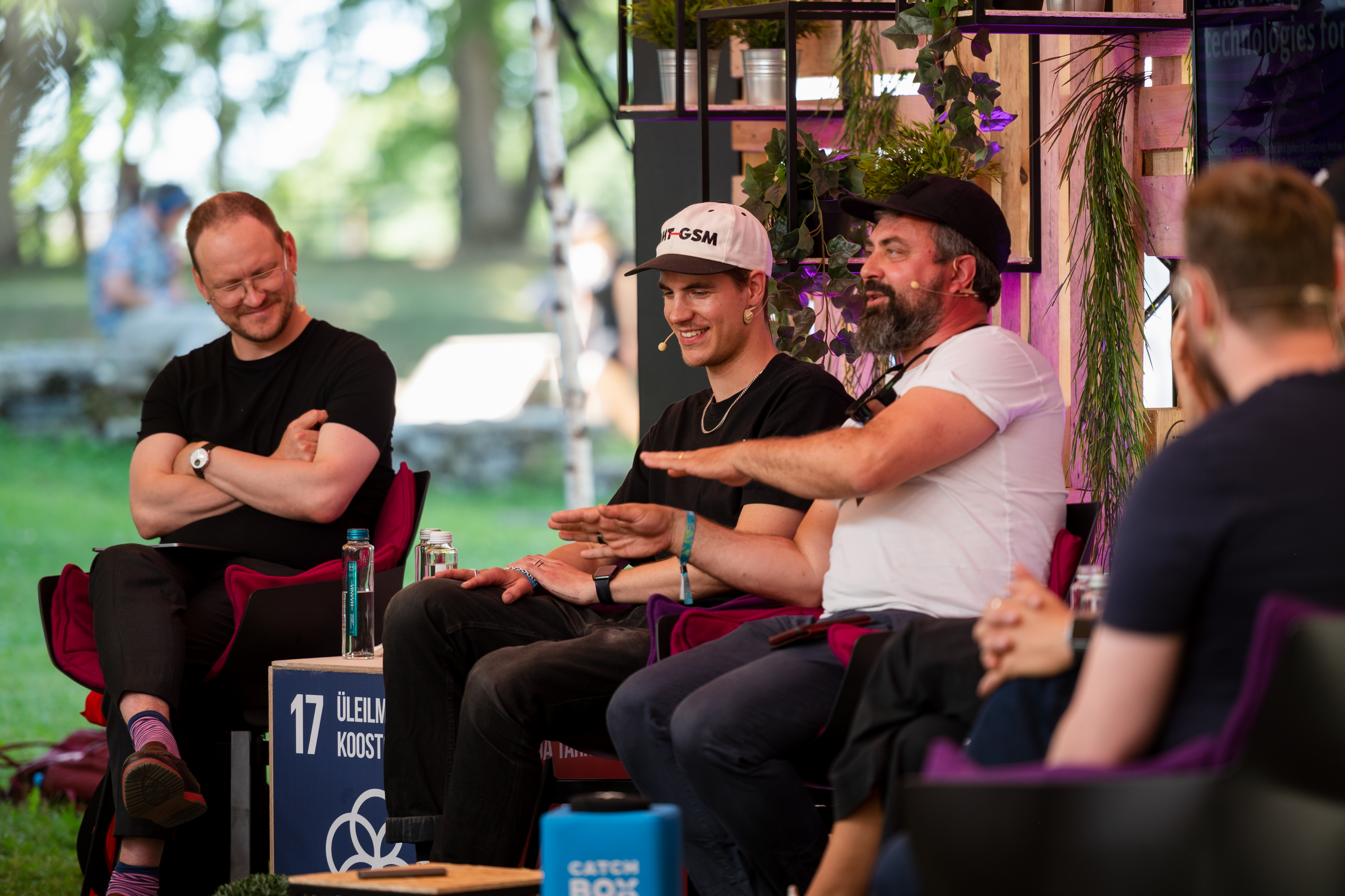 In Joost’s assessment, digital technology has the potential to make art and culture more connected. “It gives artists new creative boundaries to work within, and undiscovered ones that we’ve been craving for so long,” she said.

Finnish artist and sculptor Erwin Laiho, who creates both physical and digital art in the form of NFTs, agreed with her.

Laiho mostly deals with Web3 alternative blockchains and says that artists are thinking more and more about how to create digital art. “Gallery artists represented by physical galleries are thinking how to take advantage of this format too. They are also trying their hand in the world of NFTs,” said Laiho.

The same is true for Laiho himself since he started his artistic career as a sculptor. “By creating 3D models, I can make things that would otherwise be impossible to own,” said Laiho of the advantages of digital art.

In this day and age we have to take note of the revolution characterised best by keywords such as Web3, IoT, Metaverse, VR, AR, XR and many more.

Thus, the primary question than emerged during the panel discussion held in the zone dedicated to Digital Knowledge and organised by the Nordic Council of Ministers’ office in Estonia was: What should our focus be in the cultural space? Should we question the intentions of cultural transformation and focus more on studying the consequences?

Media and technology strategist Sten-Kristian Saluveer who moderated the panel, admitted in his opening words that technology is changing culture and those changes become particularly evident during the pandemic: “The pandemic made us take a leap 7-10 years into the future.” According to Ibrus, we must examine which paradigms in particular have shifted. We have to ask ourselves: what is the new reality like?
“In Estonia, it seems as if digital culture isn’t just anyone’s business. Everything labelled digital seems to be under the scope of the Ministry of Economic Affairs and Communications and not the Ministry of Culture,” Ibrus pointed out.

He highlighted that when we think of the virtual world, we live in parallel worlds and this matters most to people under 25.

“As a cultural theorist, my position is that we also need to consider that which already exists. First, we have to address and modernise the archives. We can also use digital culture to nurture and grow our cultural and heritage identity,” said Ibrus.

At the same time, panellists have reminded us that there is a lot of junk alongside high-quality digital output.

According to investor and gallerist Indrek Kasela, all that people active in the industry really want is to make culture more readily accessible to more and more people. “The only question is what kind of culture that ends up being. Will AI establish a culture of its own? Kasela said it is to be expected that we will continue to evolve, adding that “In the old days, people would collect stamps, as did I, but now we’re witnessing the rise of the collection of digital art.” 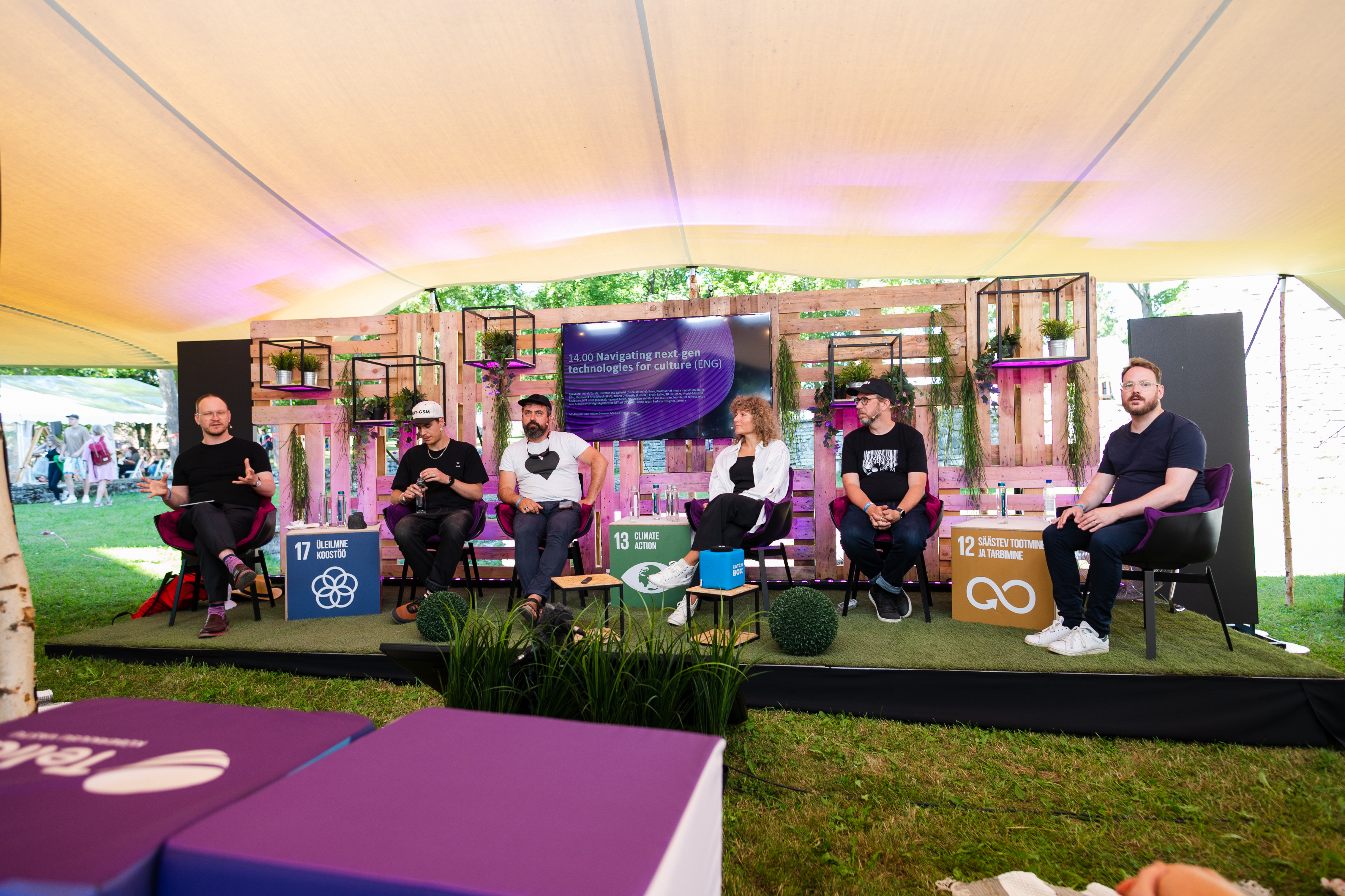 Digital art gallery – even in a virtual living room

According to Laiho, digital gatekeepers, i.e. gallery owners and managers who are art experts themselves, play a vital role in the collection and creation of digital art as they are able to distinguish between art and random scribbles. “Generally speaking, if something makes it to an auction in the art world, you may find that there’s all sorts of stuff being sold as art and that in turn reduces the value of your creation, so it’s better to sell your creation through galleries. The same applies to digital art. We need these people who can determine that the thing being sold really constitutes art,” said Laiho.

Laiho says that owners of digital galleries are like goalkeepers in the best sense of the word, because they have good taste and are able to recognise good artists and works.

Panellist Haavard Tveito, who is currently working on the first large virtual gallery in Scandinavia that is dedicated to NFT art, said that it is clear that we are not going back to living the way we did. “Everything will become even more digital” For example, we might start walking around every day with virtual glasses on. This way, we could make the invisible visible. And the content we’d be seeing – well, it could come from anywhere in the world,” said Tveito.

According to former architect Tveito, he became interested in digital art and VR at first due to the space available in the digital world. “We want to continue to surround ourselves with beautiful and provocative things and things that might even anger other people, and it’s our responsibility to come up with a way to do so in the space that is still free. 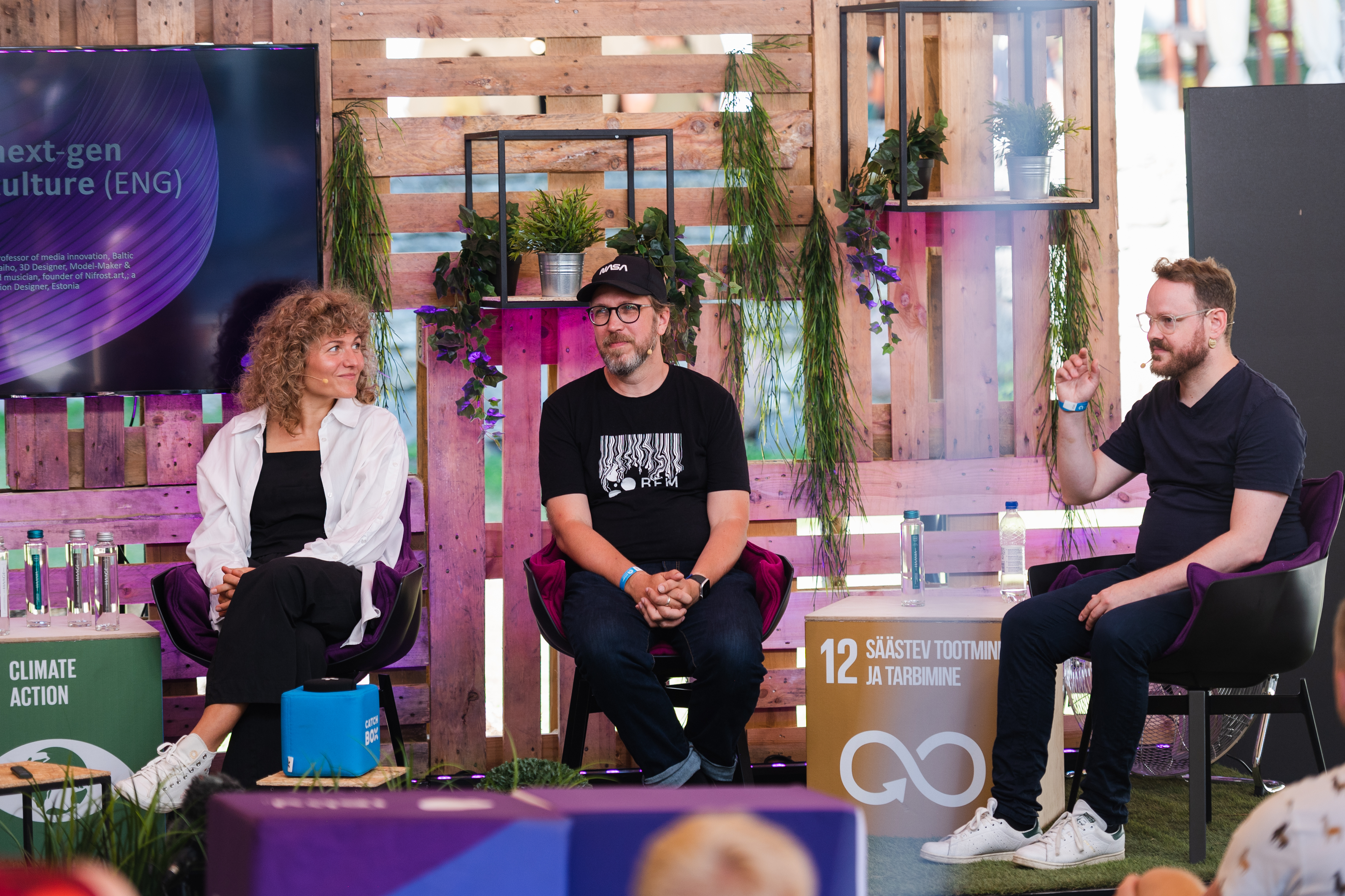 He described how one of the advantages of a virtual gallery is the ability to have a personal approach which is hard to find in the physical world. “Gallery visitors can examine artworks in their digital living room if they so choose, and understand what really lies behind a specific piece of art.”