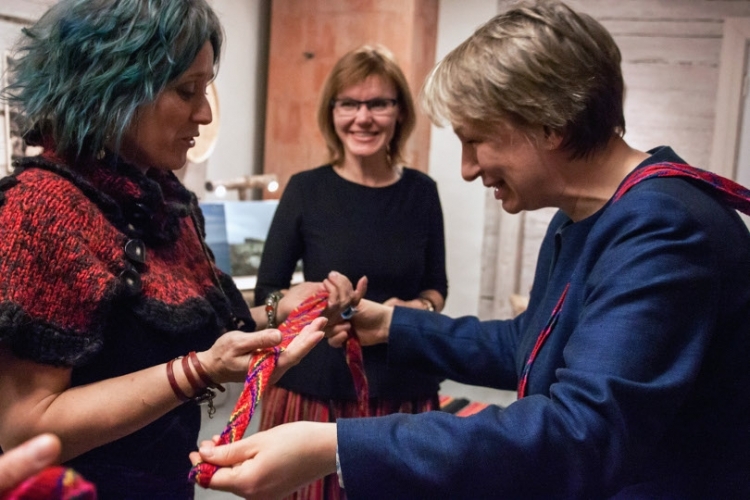 Nordic Library Week 2017 was held from 13 to 19 November under the title “Nordic Islands”. As always, a Nordic author visited Estonia during the Library Week and this time, it was Faroese writer and teacher of creative writing, artist and marionette actress Rakel Helmsdal. Helmsdal met with young and old fans of literature at Pärnu Sütevaka Upper Secondary School of Humanities and Kihnu Museum on 13 November and in Tartu Kivilinna School on 15 November. Estonian poetess and story-teller Veronika Kivisilla accompanied Rakel in Kihnu and Pärnu.

Rakel Helmsdal (born in 1966) has written over 20 books as well as plays, short stories and poems. She was the president of the Association of Writers of the Faroe Islands from 2009-2011. Rakel manages her own marionette theatre called Karavella Marionett-Teatur. Helmsdal is also a multi-talented and colourful artist who works with different forms of art, incl. graphic design.

She has been nominated for the Nordic Council Children and Young People's Literature Prize several times, including in 2017 for her book Hon, sum róði eftir ælaboganum (“She Who Rowed after the Rainbow”).

The writer’s visit to Estonia took place within the scope of the programme Nordic Writers Crossing Borders.