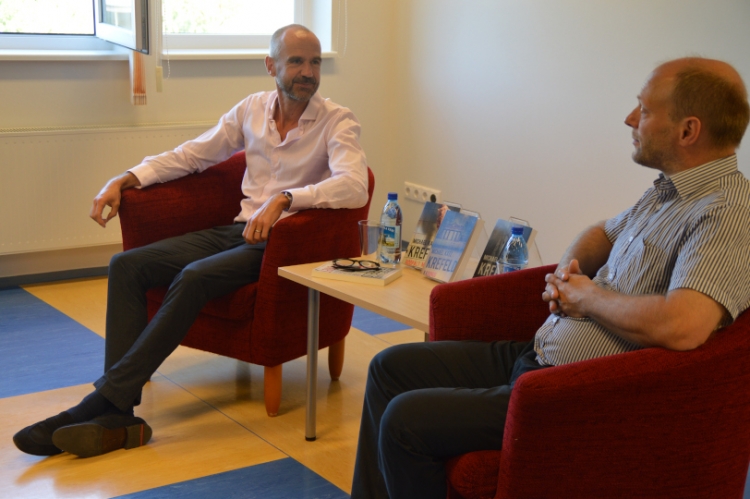 Nordic noir or Scandinavian crime fiction is the undisputed favourite of Estonian readers and TV audiences. Danish crime and scriptwriter Michael Katz Krefeld was therefore a warmly welcomed guest at the HeadRead festival this year. The meeting with Michael Katz Krefeld took place at 15:00 on 26 May in the House of Writers, where Eha Vain, cultural adviser with the Estonian office of the Nordic Council of Ministers, spoke to the writer. At 11:00 in the morning, the writer had a meeting with his readers at Viimsi Library; this event was supported by the Nordic Writers Crossing Borders programme.

“Michael Katz Krefeld is a remarkably intellectual crime writer – the way he approaches various topics in his books, such as human trafficking, prostitution, East Germany and Stasi, is eye-opening,” says Eda Vain. “People disappearing and going missing, and the author’s attempts to understand the perpetrator psychologically and reveal the background of their actions are more important in his books than counting dead bodies and finding the murderer.”

Katz Krefeld, born in 1966, is the author of several award-winning crime novels. He immediately won the First Book Award of the Danish Crime Academy for his debut crime novel “Before the Storm” (2007). The novel “Black Snow Falling” (2010) was named the best crime novel of the year. The recurring character in Krefeld’s book series is private detective Thomas ‘The Raven’ Ravnsholdt. The books in the series that have been translated into Estonian are “Derailed”, which focuses on prostitution in Europe, “Missing”, which exposes the secrets of East Germany, and “The Cult”, which goes behind the scenes of modern religions.

The guests of the festival also included other Nordic authors, such as Elina Hirvonen, children’s writers Timo Parvela and Åsa Lind, singer and songwriter Joose Keskitalo, and the man who is Finnish by nationality and, at the same time, one of the most loved children’s writers who writes in Estonian – Mika Keränen.

The HeadRead literary festival has been held for a decade and introducing Nordic writers to Estonian readers has always been a part of it. The start of the good relationship dates back to the days of the Nordic poetry festival.