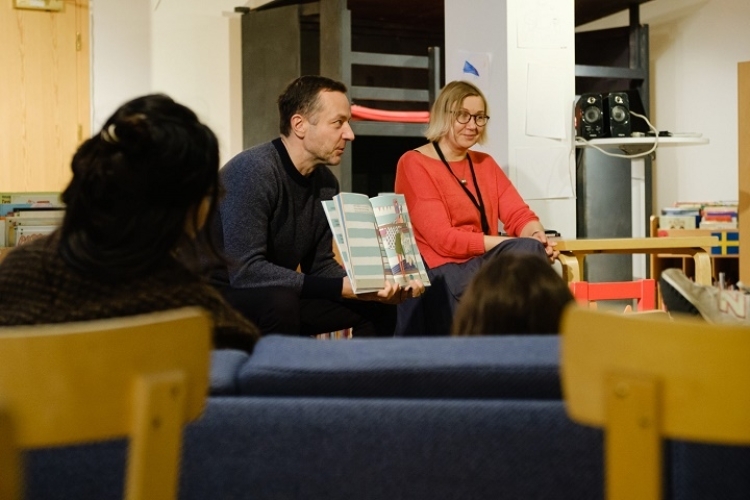 From 14-16 October, Nordic House in Iceland hosted this year’s Mýrin festival of children’s literature, which was held for the 10th time. The 2021 event was titled ‘Together in the Moorland’ and focused on environmental themes and uniting people from different cultures.

For the first time, this year’s festival involved authors from the Baltic States, who met with locals as well as the Baltic communities living in Iceland and organised a range of exciting events. Representing Estonia were illustrator, picture-book author, book designer, art teacher and textile artist Kertu Sillaste and translator and author Indrek Koff. Kertu shared with us her thoughts on the experience.

Kertu says the festival was extremely well organised. “We were so warmly welcomed, and the atmosphere was very much one of professional support,” she enthuses. “The festival was covered by the national broadcaster RÚV and all of us guests were invited to attend a reception held by the Icelandic president. The country’s Minister of the Environment honoured us by attending and giving a wonderful speech at the opening of the festival. It was standing room only at the venue, Nordic House in Reykjavík, whenever there were panels and workshops happening.”

Kertu says that as an author, she was delighted to meet other people involved in the world of children’s books, from writers and illustrators to teachers and librarians. “It’s great to talk about one another’s books and ideas, to share your doubts and fears and also to get some validation,” she says. “It’s all about feeling part of such an inspiring community.”

Kertu says it was wonderful to hear the latest ideas doing the rounds in children’s literature, with this year’s festival shining the spotlight on three main issues: nature conservation, the climate and migration. “It was fascinating to explore the best books written on those topics and to hear their authors championing them,” she says. “There’s no hesitation at all in the Nordic countries about including difficult issues in children’s literature, which makes the region a great one to look to for innovation and inspiration.” She hopes such events will continue and that interaction between Nordic and Baltic authors will soon have become an everyday occurrence. “We’ll definitely do our best to keep that flame burning and those relationships alive,” she promises.

While in Reykjavík, Kertu organised a workshop based on the wordless book Appi! (‘Help!’). She says that running workshops with children is the best way of getting honest feedback on your work and seeing whether your book reaches them, whether they understand it and whether the subject matter speaks to them. A total of 36 children and four teachers took part in the workshop. “We read the book together, as it were, and the three-dozen eight-year-olds followed the story and then discussed what happened in it,” she explains. “Wordless as the story is, it worked really well as the basis of a multilingual event.”

The group worked together to illustrate two of their own wordless ‘books’: each child drew one person, animal or monster as well as buildings, trees and flowers. The pictures were then cut out and stuck onto an oversized backdrop to form one long story. “There wasn’t a lot of time, so the pace was furious, but the results were fantastic,” Kertu smiles. She was also gratified to receive warm

words of thanks from the teachers taking part in the workshop. “It seems I had something important and innovative to share with them!”

Kertu says that quite a few of the festival attendees came up to her afterwards to tell her that the ‘wordless book’ concept was a new one to them, while those who were already familiar with it said that there was merit in the concept and that it was definitely worth trying. Indeed, events like the festival, says Kertu, are a great source of energy and inspiration going forward. “It’s wonderful to hear that you’re doing something important,” she admits. “Telling children stories can make the world just that little bit better.”

Pictures of the Festival