Minister of Population of the Republic of Estonia

Riina Solman is the Minister of Population of the Republic of Estonia.
Before starting as the Minister of Population in April 2019, Solman served as advisor to the Minister of Justice. Solman has also worked as the head of the Public Relations Division of the Ministry of Justice and as the public relations advisor of the Minister of Defence. Her previous work postitions also include being the head of communications and development of the Viimsi Municipality Government, the head of marketing and communication at Starmaker Ltd and Starmayer Ltd, and being the head of media for political parties.
Solman has been active in voluntary work as the head for NGO Oleviste Care. She was awarded the UNICEF Blue Bird titile in 2009 and was the Ambassador of Estonia to Europe in 2010 for the fight against poverty and exclusion.

Professor of the University of Tartu, Dean of Faculty of Social Scienses, Estonia

Raul Eamets is a professor of macroeconomics and dean of the Faculty of Social Sciences at Tartu University. In research Eamets has focused on labour market issues, but also on the area of general macroeconomic developments in the Baltic countries. His main research areas are education and labour markets, migration, wage gap, labour market flexibility and flexicurity. He was one of the initiators of the current migration conference in 2013. Together with Tiit Tammaru he edited Estonian Human Development Report 2016/2017 dedicated to migration issues. He has written several articles in Estonian media about migration and migration policy.

Raul Eamets will be the moderator at the conference.

Academy of Finland Postdoctoral Fellow, Swedish School of Social Science at the University of Helsinki, Finland

Rolle Alho is an Academy of Finland postdoctoral fellow at the University of Helsinki. His research interests lie at the cross-roads of migration, ethnic relations, and the labour markets. Currently is Alho responsible for teaching two master level courses at the University of Helsinki that he has set up personally: Politics of Immigration and Sociology of Work. I have also conducted research and lectured on e.g., the following topics: temporary migration, transnationalism, migration and social security, multiculturalism, globalisation, and international student mobility.

In 2017 Alho was granted a three-year grant from the Academy of Finland for his research project: Whose Interests? A comparative study on trade unions responses to migration and migrants in Finland, Ireland, and Portugal.

Olle Jörv holds a joint PhD in human geography and regional planning (2013) from the University of Tartu and Ghent University. As a human geographer, his broad interdisciplinary research interests focus on human mobilities in spatial, temporal and social contexts from the individual to the aggregate level. He is particularly interested in how big data such as mobile phone and social media data can be used to examine individual spatial mobilities and behaviour, and how this can be interpreted and implemented in spatial planning and policy. In recent years, he has examined ways to integrate big data with accessibility modelling and what explains socio-spatial differences in human mobility. Olle is currently working on a new project “Tracing Interactions and Mobilities Beyond State Borders: Towards New Transnational Spaces (BORDERSPACE)”.

Director of the Migration Institute of Finland, Finland

Dr. Pellander is currently the director of the Migration Institute of Finland. She previously held a fellowship at the Tampere Institute for Advanced Social Research. She is the chairperson of the Finnish Society of the Study of Ethnic Relations and International Migration. She defended her doctoral thesis on the regulation of family migration to Finland in 2016 (Political History, University of Helsinki, Finland). After her defence she worked as a post-doctoral researcher in the Academy of Finland financed research consortium GLASE (Multi-layered borders of global security), examining migrants’ everyday experiences of security and bordering. Before her engagement with GLASE she worked as a researcher in the EU-funded research project EUBORDERSCAPES on issues of everyday bordering and intersectionality. She has been a visiting researcher at the Stockholm University, Sweden (2010) and the Goethe University in Frankfurt, Germany (2018). Her field of expertise are questions of gender and migration, intersectionality, everyday bordering, family reunification, marriage migration and the Nordic welfare state. Her research has been published in international journals such as the Journal for Ethnic and Migration Studies, Citizenship Studies, Political Geography; NORA and Journal of Family Issues.

Uffe Palludan is founder and director of the company Palludan Fremtidsforskning (Palludan Future). Palludan holds a Master of Economics from Copenhagen University. He is specialised in regional development, transportation and future analysis and has written many books on the topic of welfare state, transportation, the Øresund Region and the Baltic Sea region. In addition to books Palludan has published more than 100 future analysis/reports for the public and private clients in Denmark and Sweden and is a recognized speaker in both the Nordics and in Europe. Palludan has been a strategic adviser for Copenhagen Airports and Port of Copenhagen. His previous work experience also includes AKF - Local Government Research Institute, The Danish State Railway, Copenhagen Business School as an external lecturer, The Danish Ministry of Finance, CIFS - Copenhagen Institute for Futures Studies and Director of Research for both the city of Malmö and Copenhagen.

Professor of the University of Tartu, Academician, Estonia

Tiit Tammaru is an Estonian geographer, professor of urban and population geography at the University of Tartu and an academician at the Estonian Academy of Sciences. His research interests include migration, residential mobility, housing, ethnic segregation across different life domains (family, neighbourhood of residence, workplace), relations between social inequalities and socioeconomic segregation, as well as comparative segregation studies.

Donatas Burneika is the head the Institute of Human Geography and the chief researcher at the Demography Lithuanian Social Research Centre. He also a professor of Department of Geography and Land management at Vilnius University and holds the honourary title of Ambassador of Regional Studies Association for Lithuania.

Jonas Wendel is the Chief of staff to the Secretary General of the Nordic Council of Ministers. Before starting at the Nordic Council of Ministers´, Wendel was the Swedish Ambassador to the DPRK (North Korea). Representing Nordic countries, USA, Australia and Canada. He has also been the Minister Counsellor at the Embassy of Sweden in Helsinki;
Counsellor for economic and European affairs in the Embassy of Sweden in Paris; Deputy Director and head coordinator for Foreign Minister Bildt’s EU-meetings at the Department for European Affairs in the Ministry for Foreign Affairs in Stockholm.
He has been the Iran-desk at the Department for Middle East and North Africa in the Ministry for Foreign Affairs in Stockholm and Deputy Head of Mission in the Swedish Embassies in Rabat, Morocco and Tehran, Iran.

Professor, Dean of the Faculty of Geography and Earth Sciences, University of Latvia, Latvia

Dr. Zaiga Krisjane is a Professor and Dean at the Faculty of Geography and Earth Sciences (University of Latvia). She has an extensive research experience at both national and EU level in field of migration studies, urban and population geography. Her field of expertise at the Latvian Council of Science is social and economic geography. She is also a Corresponding Member of the Latvian Academy of Sciences. Currently, she is the principal investigator of the National research project “Towards sustainable development and inclusive society in Latvia: response to demographic and migration challenges (DemoMig)”, which is part of the National Research Program: “Latvian heritage and future challenges for the country's sustainability” (2018-2021). Prof. Zaiga Krisjane was the team leader in the Horizon2020 funded project “YMOBILITY - Youth mobility: maximising opportunities for individuals, labour markets and regions in Europe” (2015-2018). She was a consultant of the research projects funded by the European Commission. She was granted the Alexander von Humboldt Fellowship for experienced researchers at the Bamberg University (Germany), for her work on trans-regional migration studies (2011-2013). 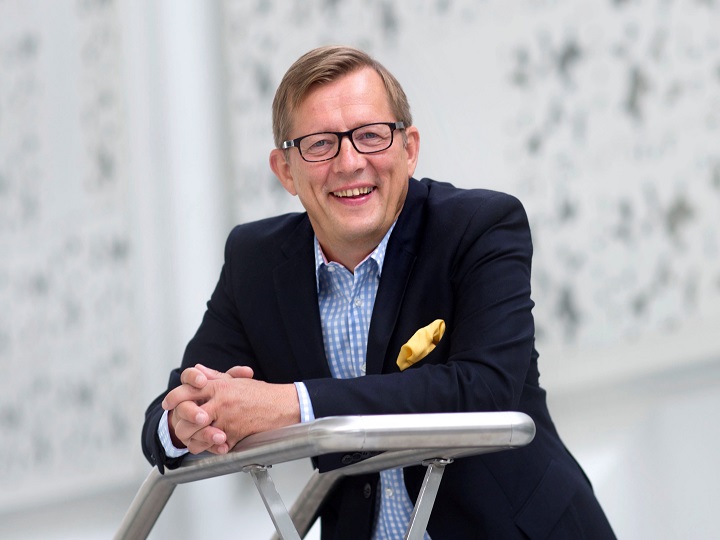 Christer Haglund is the Director of the Nordic Council of Ministers´ Office in Estonia. Before becoming the head of the Nordic Council, he spent 14 years in the Finnish Ministry of Foreign Affairs, in which he rose up over the years to become director of public relations – a role in which, among other things, he was Head of Media during Finland’s first presidency of the Council of the European Union.
In 2000, Haglund joined Finnair and went on to become Senior Vice President, corporate communications and a member of the management board of the airline. From autumn 2011 he served as the CEO of the Finnish Fair Corporation.