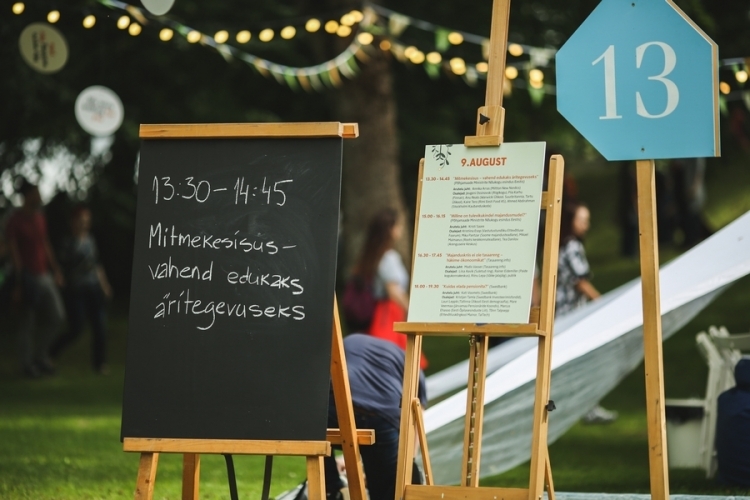 The Opinion Festival was once again held in Paide on 9 and 10 August, and the Estonian Office of the Nordic Council of Ministers participated for the fourth time. Both foreign and local experts were involved in the panels, looking for answers to questions about the importance of diversity in economic activities and what the economic model for the future should be like considering the use of resources. The discussions were held in English and translated into Estonian sign language.

We invited Piia Karhu (Finnair), Anu Realo (University of Warwick and University of Tartu), Kaire Tero (Rimi Eesti), Ahmed Abdirahman (Stockholm Chamber of Commerce), Jevgeni Ossinovski (member of the Riigikogu) to discuss diversity and the discussion was moderated by Annika Arras (Miltton JLP). When asked whether diversity at the workplace should be discussed, the majority of the people listening to the discussion answered ‘yes’, although many of them admitted that they see no shortcomings at their own workplaces.

Ahmed Abdirahman, who fled the civil war in Somalia as a child and now lives in Sweden, focused on how to reach a better future and a more diverse world. He believes that dialogue should be changed by dealing with problems instead of standing by and waiting for others to intervene. Among others, the young man established Järvaveckan, which is an event for sharing thoughts like the Opinion Festival and attracts politicians, citizens, companies and organisations that care about the future of Sweden. According to Abdirahman, there is no point in looking for culprits in discrimination – we’re all just people. Ahmed told the listeners how difficult it was for him to find a job in Sweden after living abroad for seven years, even though he’d acquired a good education in America and worked for the UN. Nobody told him that the reason was his origin, but he could sense it. People must be brought together so they can learn from each other – without it, there can be no progress or development. For example, the fear of immigrants that divides people into two sides could be quelled by creating opportunities for talking to them.

In his words, it’s important that the media and culture are also diverse, because what we see on TV affects our thoughts. He finds that we need a vaccine against prejudice. Abdirahman believes that we also need knowledge in the format of data in order to make changes and change beliefs. We need to clarify the nature of the problem in order to make the working environment more diverse. Data collected with studies are one way of attracting attention. He says that there are companies in Sweden that are an example to others by setting themselves the goal of increasing diversity – also in positions with higher salaries. Abdirahman added that despite everything, the world is becoming a better place, as the focus on problems is increasing constantly.

Piia Karhu spoke about her experience of living in different countries and the importance of seeing what is going on elsewhere in the world in order to see the big picture. She said that rushing is a problem, as it means that conclusions are drawn in haste. Karhu agreed that a dialogue is necessary in order to get to the bottom of any topic. Diversity enriches and every discussion is useful, even if you don’t like the opinions of others. She believes that eight-year students are already a good target group for the introduction of ideas. For example, to get them interested in becoming a pilot. Karhu agreed with Abdirahman: people who are truly different must be included in order to promote development.

Kaire Tero explained how diversity to her means much more than age, nationality or colour. She said that we tend to prefer people who are similar to us. Thus, as many team members as possible are included in the recruitment process at Rimi – each of them can give their opinion and the end result should be as fair as possible.

Anu Realo mainly studies personality traits, values, social capital and subjective well-being. The pioneer camp in Crimea opened her eyes to diversity for the first time, as it made the future professor understand how different, and also how similar people are. Realo has lived in different countries and studied different people during her research. She finds that conscious prejudice is a topic that has stood out sharply in Estonia this year. We cannot control subconscious prejudice – it emerges automatically, but we could avoid conscious prejudice. Realo says that cultural, national or any other diversity leads to the highest level in all walks of life. For instance, universities are already following this understanding, which is why they usually employ lecturers from many different countries. The professor believes that diversity makes our society better. Taking care of all members of society in the same way should be the norm, and they should not be ranked. However, if human values are not a sufficient motivator, then studies have proven that a diverse working environment helps increase profits in companies.

Jevgeni Ossinovski shared his experience of how to become an Estonian. He felt like an alien in the Estonian school, as his native language is Russian. The politician added that belonging to a group depends on how much you want it and found that diversity is nothing more than a pretty synonym for discrimination. Equality is what we should strive for. Ossinovski said that establishing gender equality in the party has taken time and effort, but repeated that wanting something is the key. He spoke about the gender pay gap in Estonia and how people in positions of responsibility often ignore the existence of the problem. Often, this becomes the biggest obstacle. The situation could be improved in the public sector when he was a minister, but the opposition to change in the private sector was too big. For example, companies refused to indicate the salary in job advertisements. The small number of employees whose native language is Russian in state authorities has also raised questions. Nobody has been able to pinpoint the exact reason, it’s possible that preferring people similar to ourselves, as the others participating in the discussion also mentioned, is a factor.

A listener mentioned Israel as an example, where female mentors helped women establish start-ups. Thus, they created a situation where many questions that hadn’t been asked before found answers. This proves that diversity enriches and interesting innovative results can be achieved if you keep an open mind.

When the panellists were asked what could be the vaccine against different kinds of discrimination, they answered that it could be tolerance, noticing the people around us, creating opportunities for getting to know each other (meetings, dialogues), the will of citizens and submitting demands to political forces – if there is no demand, there is also no supply.

Pictures of the Opinion Festival can be found HERE.