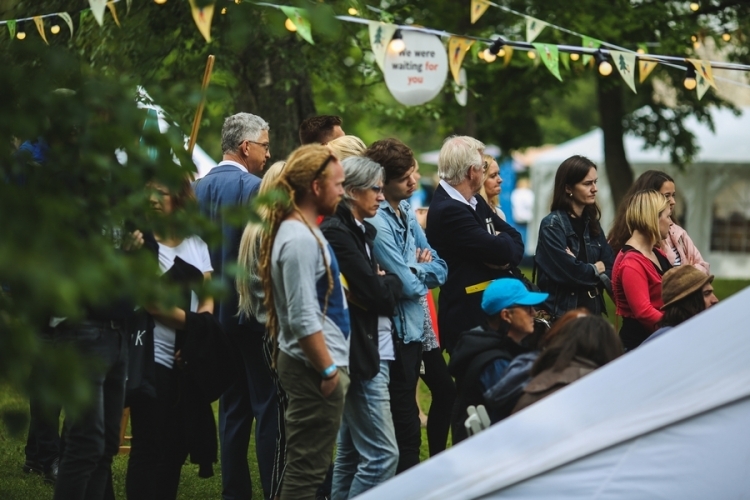 The Opinion Festival was once again held in Paide on 9 and 10 August, and the Estonian Office of the Nordic Council of Ministers participated for the fourth time. Both foreign and local experts were involved in the panels, looking for answers to questions about the importance of diversity in economic activities and what the economic model for the future should be like considering the use of resources. The discussions were held in English and translated into Estonian sign language.

We invited Mika Pantzar (Finnish futurist and economist), Tea Danilov (Foresight Centre), Mikael Malmaeus (Stockholm Environment Institute) and Kristiina Esop (Responsible Business Forum) to discuss what the economic model for the future should be like. The discussion was moderated by Kristi Saare (investor).

The moderator asked the participants how we could achieve a sustainable economic model. They admitted that if companies had to choose an expensive alternative that spares the climate or a cheaper one, they tend to go for the cheaper and more harmful variant, although the number of exceptions is increasing.

Mika Pantzar explained that the biggest concerns in the present growing economic model are the food sector, mobility and increasingly larger places of residence. More and more energy is used for the production of food, people use care increasingly more as they move further away from centres, and build houses that are too big for our needs. He finds that the implementation of stricter regulations and pricing policies would be the most effective way of getting the situation under control. The consumer is ready to change their habits if they’re offered simple alternatives. There are several aspects that need to be considered. Wealthy countries will be fine, but the poor people of poor countries are the biggest concern. Taking decisive steps is considerably easier in dictatorial countries than in democracies. He finds that there isn’t enough will to deal with the problem in Finland, although the necessary data and knowledge exist.

Kristiina Esop said that there are two types of entrepreneurs in Estonia – those who see the problem and try to improve the situation, and those who ask where the profit is. Unfortunately, the desire to earn profit is stronger than the desire to protect the environment, and we can only blame ourselves as a society for this. It would help if we produced less or in a more environmentally-friendly manner, but in order to achieve this we must learn to cooperate and agree on the same convictions all over the world. Fortunately, there are examples of business leaders who have changed their lifestyles, but we should start dealing with the problem at schools – we should teach our children what really matters, what climate change will lead to and so on. She finds that strong will and leadership are extremely important, as is a systematic approach. Esop names Greta Thunberg as a good role model, as she has become the voice of the people who fight against climate change. She believes that the opinions Greta has voices and her popularity have made some Estonian entrepreneurs think about climate.

Mikael Malmaeus admitted that although we only have one planet, an average Swede currently uses the energy resources of four to five plants and always finds possibilities for spending money. Unfortunately, Estonia is statistically not far off. We cannot deny that everything we do has some kind of an adverse impact on the environment. Therefore, we should all takes steps together and try to restrain ourselves one way or another. He believes there are various problems in the economy, but a stagnant economy without development is not one of them. The economy doesn’t have to grow all the time. He agrees with Pantzar that taxing capital would not hurt the poor and would help save the climate. Changing the way people think is important. An even distribution of resources would also help. He finds that in Sweden, questions remain unanswered largely because there is a lack of will. In order to find efficient solutions, we must put more effort into spreading our knowledge.

Tea Danilov said that convenience is not the only factor that makes us consumer. In her opinion, we should delete the equals sign between big consumption and high social status. It’s time for owning and consuming less to be in fashion. However, we must keep in mind that a large part of humankind hasn’t even started consuming yet. We should also try to find ways of helping people who live in extreme poverty. She concedes that the younger generation is less interested in owning things and more aware of the environment. However, there are two sides to every coin and she doesn’t want to say what is fully true or wrong, e.g. whether renting instead of owning or any kind of sharing is better. The economic growth also has positive sides. In any case, we should tell politicians what we want instead of keeping silent. We need measures that would make business managers think twice before they take steps that harm the environment. We also need smart regulations. Too much is invested in old, polluting technologies, including at the level of state. This is a concern we should overcome first of all.

We will certainly continue sharing our thoughts about this and try to help find solutions.

Pictures of this years´ Opinion festival can be found HERE.