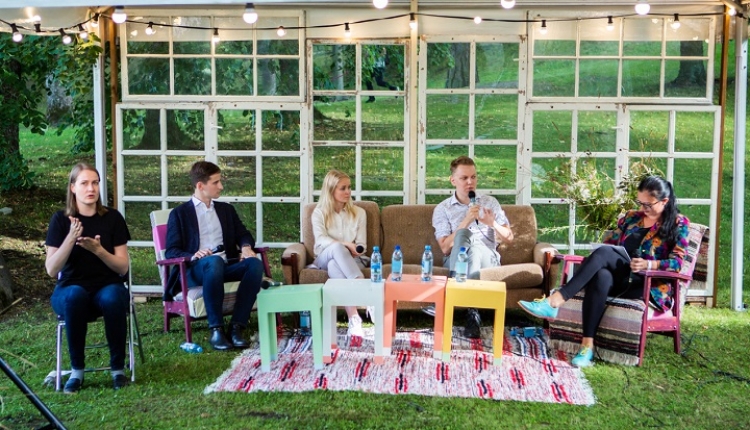 If someone reported misconduct where you work, what would happen?

We asked this very question of the audience during the ‘Snitchers, Tattletales and Whistleblowers’ panel at the Opinion Festival on August 14th. Perhaps unsurprisingly, 20% of the respondents admitted they had no idea what would happen. ‘Dobbing people in’ has only recently started to be seen in a positive light in our cultural sphere, and many companies simply have no experience of dealing with it.

It was therefore gratifying to hear that more than half of the respondents (52% on final count) felt that such a report would be taken seriously and that the situation would change for the better. Of course, it should be borne in mind that those taking part in the discussion were a certain type of person: those who themselves had some sort of experience with the issue and thus had something to say about it. In the eyes of Transparency International Estonia, it is a good sign that just 28% of the respondents assumed the ‘snitch’ would be demonised and the issue swept under the carpet or that reporting the issue would change nothing.

Eesti Energia has had a reporting system in place for more than 10 years now, which is why it came as no surprise to panellist Tõnis Sepp (the head of the company’s Fraud Risk Management Department) that so many felt the situation would improve once reported. In the first six months of 2020 a total of 60 incidents were reported in Eesti Energia, only a very small number of which led nowhere or ought to have been directed elsewhere.

We asked Tõnis how we can rid ourselves of the complex that historically has made us so reticent to blow the whistle in Estonia, particularly from the point of view of companies.

“There’s definitely an historical complex attached to reporting things in Estonia, since it was always associated with demonstrating your loyalty to the Soviet authorities, and in the worst cases ‘whistleblowers’ saw an opportunity to get ahead by making life difficult for people who’d done nothing wrong. That’s why we still see today that in the cases that end up in the public eye, people tend to focus more on the motives of the person who reported the incident than on the incident itself, with anonymous whistleblowers coming in for the most stick.
But at Eesti Energia we’re guided by shared values and ethics, and giving people the chance to report things is an important way of finding out about problems that have cropped up in the way you do things that could have a negative impact on the organisation, employees and society as a whole if you fail to deal with them. In my view, to effect a change in attitudes we should be bringing cases to people’s attention even more, both within organisations and more broadly, where both reporting incidents and responding to such reports have had a positive impact for everyone to see.”

How we talk about reporting and the terms we use to describe it are of huge importance. One thing is refraining from words and phrases with negative connotations like ‘dob someone in’, ‘tattle’ and ‘rat on someone’, but equally, labelling people who draw attention to problems can be just as detrimental in opening up the culture within an organisation. It should be a normal way of going about things – nothing special.

However, in society generally this change is slow in coming. During the panel the participants were also asked how we can move beyond comparisons between whistleblowers and Soviet-era martyr Pavlik Morozov, who denounced his own father. After the event, we asked one of the panellists, Eesti Ekspress investigative journalist Martin Laine, for his thoughts.

“I represent the young and uninformed Gen Y, so I had to Google the Morozov story. Clearly because of the time that’s elapsed since it all took place, my take on these things is completely different to that of certain representatives of older generations. So saying, I did mention during the panel itself that Estonians have very dark memories of people being informed on. Even among my own relatives, dobbing people in during the deportation years ripped families apart and left them with wounds that still haven’t healed. That chasm between generations, those stereotypes, aren’t something you get over or can get past in the blink of an eye. I think you need to embed the culture, including by legislating for it, show people the positive results of reporting things and provide them with clear examples of how giving ‘snitching’ its due and taking it seriously might have saved an organisation from the worst of it in a particular situation, like TalTech, or the Estonia Theatre, or Danske bank. That way people should gradually realise that we’re not living in the USSR anymore, but in a democratic 21st-century society where even the little people can have a big voice – one that resonates throughout society and has the ability to make it a better place.”

Culture and values may evolve slowly, but legislation to protect whistleblowers is already being drafted in Estonia. The EU directive on the protection of people reporting abuses of union law requires Member States to meet rather high standards, whose scope panellist Mare Tannberg, an adviser at the Ministry of Justice, says Estonia is already planning to extend. For example, according to the legislative intent, the plan is to draft a horizontal law providing protection when informing on any crime in cases where the person reporting the misconduct became aware of it within the framework of an employment relationship (including recruitment), while volunteering or during an apprenticeship.

The law will not only apply to the public sector, but also to private companies employing more than 50 people. Therein, organisations will be required to establish reporting channels that guarantee confidentiality as well as measures for the investigation of the incidents reported. The person who reports the incident will also be given the right to report it outside of the organisation (e.g. to the police, the Prosecutor’s Office or the supervisory body in their field) and, on certain conditions, to go public with it via the media.

Moreover, in accordance with the EU directive, when incidents are reported, so-called gagging clauses – which have previously stopped employees from flagging up incidents if this would impinge on business secrets, for example – will no longer hold any weight. We asked Martin Laine, who has worked on a number of whistleblowing cases, whether such clauses are commonplace.

“I’d say they’re the main obstacle to people reporting things, yes. There are clauses in everyone’s employment contracts that require you to maintain some sort of confidentiality. This shouldn’t be a problem when it comes to in-house whistleblowing, but time has shown that if the proper organisational culture isn’t in place, in-house solutions aren’t always enough. With the TalTech scandal, we consulted legal experts so as to make it clear to ourselves what the risks were, since obviously the witness had access to some very sensitive material. And that’s presumably the case with the majority of whistleblowers. So it’s no wonder the TalTech press release reads, ‘The circumstances which came to light in the course of the investigation suggest that Keegan McBride did not act in good faith or in accordance with the loyalty obligations arising from the Employment Contract Act.’ It was yet another case of pointing out the fine print rather than dealing with the problem.”

When it comes to protecting whistleblowers, this means two things in practice: guaranteeing the confidentiality or anonymity of the person in question; and protecting them from retaliation. It is for this very reason that the directive offers whistleblowers protection against browbeating (e.g. for breaching obligations related to loyalty or a company’s business secrets or reputation) by enabling them to take the matter to court.

The issue of loyalty also arose during the panel. Not only in terms of whistleblowers who have become known to the public, but occasionally also in speaking with organisations, Transparency International Estonia has noted that loyalty is often equated with keeping schtum about a company’s problems. However, the panellists agreed that within a company or organisation, loyalty should mean that the company, its people and society are all protected from potential harm, whether to their hip pocket or their reputation.

How then can we encourage people to report incidents and bring about a change in the prevailing culture? One example is that of the United States, where those who blow the whistle are in fact financially rewarded for doing so. We asked Ministry of Justice adviser Mare Tannberg, who took part in negotiations at the EU level, whether this option was raised in the drafting of the EU directive.

“It doesn’t regulate whether or how people should be paid for reporting things. Since studies have shown that potential whistleblowers often fail to blow their whistles for fear of coming under pressure from their employers, the directive focuses on encouraging people to report things by prohibiting employers from pressurising their employees and by establishing protective measures. As far as we know at the Ministry of Justice, that sort of practice isn’t common in EU Member States – the only example we have is from Slovakia, where people can be paid for reporting incidents, but only in certain cases. The legislative intent in the draft Whistleblower Protection Act that’s being prepared in order to incorporate the directive into Estonian law has no proposals in it in terms of paying people for reporting things, because the Ministry of Justice doesn’t feel it’s either necessary or justified.”

Since financial reward has been ruled out in Estonia, we asked the panellists and audience how whistleblowing should be encouraged and normalised. One point raised was that organisations simply don’t know how to introduce and implement whistleblowing measures. Here at least the tool kit developed by Transparency International Estonia is likely to be of help.

Another of the points made was that more positive examples need to be given. We hear very little about well-functioning systems, because if they work the way they are meant to, problems are nipped in the bud and there is nothing in the end to talk about. But if there is no communication with the whistleblower and their report is never dealt with – including in cases where the organisation lets the whistleblower down – we only ever hear about it via some court ruling or the press.

In that regard, to bring about a positive change we need to talk about cases of whistleblowing that have proven useful, recognise those who dare to draw attention to misconduct and come to their defence if they are rounded on for doing

Video of the full discussion

Pictures of the event