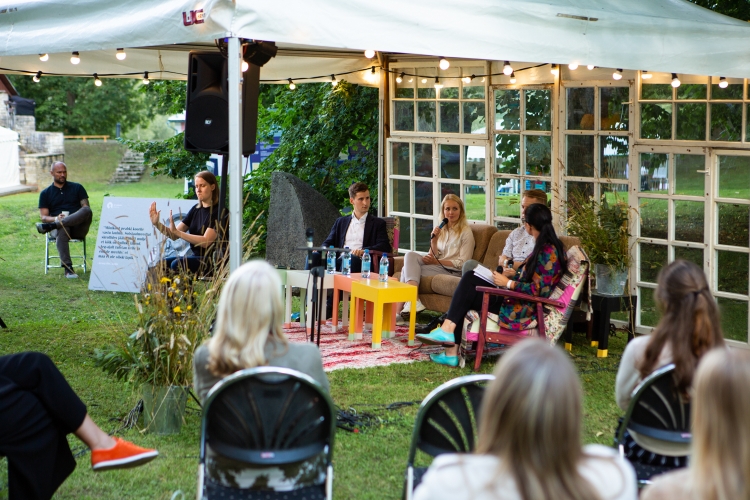 For Estonia, 1991 was a turning point: it was the year in which the country regained its independence and started rebuilding itself as a state. That same year also saw the opening in Tallinn, on 30 January, of the Nordic Council of Ministers’ Office in Estonia, one of the aims of which is to promote Nordic values and to boost the competitiveness of the Nordic-Baltic region on the world stage. Together we are stronger.

In 2021 we are celebrating 30 years in Estonia – a milestone we are happy to be sharing with the country itself as it marks three decades since regaining its autonomy. Over the years we have brought together countless experts, politicians, officials, entrepreneurs, opinion leaders and creative figures from the region, helped to organise roundtables, workshops, seminars, conferences and cultural events and promoted the establishment of cooperation networks between the Nordic countries and Baltic States. We have made a significant contribution to culture, the creative economy, social debate and the development of the green economy and supported social equality, a scientific approach and digitalisation throughout the Nordic-Baltic region.

In recent years we have been an enthusiastic partner to the Opinion Festival, since it is a worthwhile platform on which to discuss issues of social importance, to hear a wide range of views and to pinpoint problem areas we need to work to eradicate. We have great plans – our vision is for the Nordic-Baltic region to be a green, competitive and socially sustainable one by 2030. Those plans are reflected in the discussions we are spearheading at this year’s Opinion Festival: they will focus on the meaning of ‘freedom of speech’ in a changing world, cooperation between scientists and entrepreneurs and the importance of trust in society. The discussions will take place under the banner ‘Nordic Talks’ on 13 August.

No doubt many of us have read comments on social media and in public forums that disparage, ridicule and vilify others. Shielding themselves behind their computer screens and posting under names that reveal nothing about themselves, commentators are cocooned in an anonymity that emboldens them like never before to air their views, whether politely or otherwise. During our first discussion, entitled ‘Mystical Creatures of the Internet – Trolls and Internet Warriors’, which will be taking place at 12:00 on 13 August, we will be asking who these enigmatic creatures are and seeking to understand why threats and harassment have become so common online. We hope that discussing the reasons for such actions will lead to wider public debate and give us a better understanding of how to respond to these trolls and warriors.

Marked by tension and conflict, the online world all too often reflects a society suffering in the same way. While Finland has repeatedly been named the happiest country in the world, Estonia still has a long way to go to claim the title. It has been noted that the level of happiness in Finland is due to the high degree of trust and thereby the wealth of social capital that exists in the country. If people trust one another and the state, they feel more closely tied to their fellow countrymen and to their leaders. They are motivated to make more of a contribution to the functioning of the state, they are willing to try to understand the decisions made by the government and they are prepared to make minor sacrifices for a noble cause, because they trust the people they have chosen to run the country. Figuratively speaking, in Finland, 1+1 adds up to more than 2. At a time of change or in a time of crisis, social capital tends to be eroded: people become stressed and often don’t know what lies ahead, and it is difficult to trust those in charge, because in all honesty no one knows what it is right. During the panel starting at 16:00, entitled ‘Trust as Social Capital’, we will be looking for an answer to the question: How can we increase trust in society so that Estonia eventually becomes one of the five happiest countries in the world and can be proud of the social capital it has amassed?

Moving from social capital to financial capital, we find laid out before us a world in which science and technology are closely interconnected. This world is undoubtedly full of exciting opportunities and offers myriad advantages, but it is also rife with dangers that need to be dealt with responsibly. Are deep tech and persuasion technology the solution to seeing off global challenges and promoting social well-being and economic growth? Will supporting deep-tech companies ensure higher incomes and more free time for all? To debate these issues, we have brought together a fantastic group of professionals with a pragmatic world view who have been wrestling with the topic for years. During the discussion starting at 14:00, entitled ‘From Science to Business – the Nordic Dimension’, we will be talking about how universities and companies can directly contribute to the development of society and the economy by implementing the results of academic studies in everyday life.

A great way of warming up for the discussions and immersing yourself in a Nordic atmosphere ahead of time is to play the online game ‘How Nordic are you?’, which is both fun and educational. We worked with our Baltic colleagues to put the game together as part of our aforementioned 30th anniversary celebrations. The idea behind it is to boost cultural understanding, which is important if we want the people of the Nordic countries and Baltic States to feel like one big community. Also, it is great fun and both a useful and entertaining way of passing the time!

See you in the ‘Nordic Talks’ area at the Opinion Festival on 13 August!