Trafficking in human beings: identification of victims and criminals, challenges and new trends 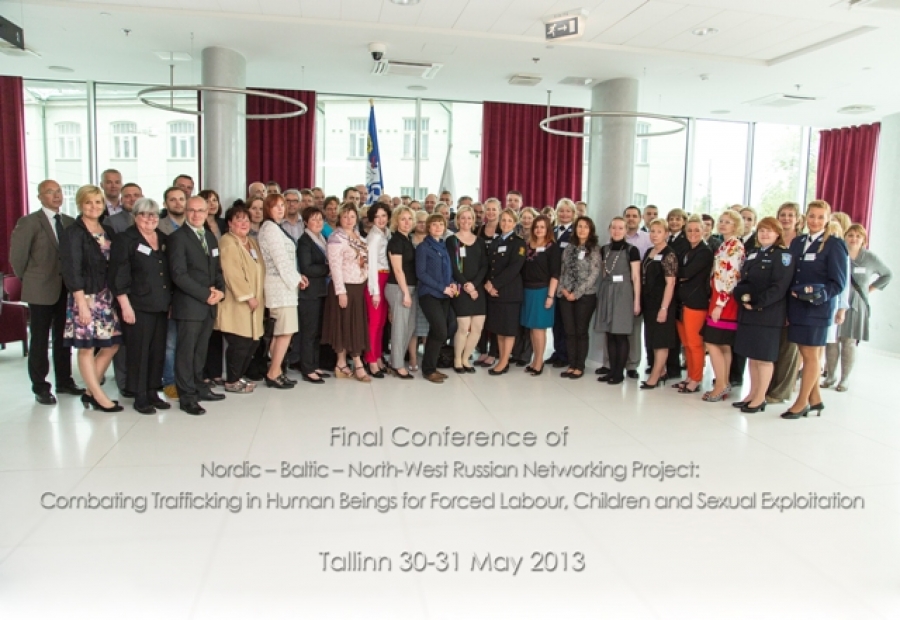 Trafficking is a global problem and all countries are affected, as a country of origin, transit or destination. The estimated number of victims of forced labour is 21 million worldwide, according to the International Labour Organization. Human trafficking is a lucrative industry – often referred to as the third most profitable illegal business after drugs and the arms trade.

The conference 'Identification of victims and criminals – why we do not notice them?' on 30 & 31 May in Tallinn, Estonia formed the conclusion of a Nordic, Baltic and north-west Russian cooperation project that has lasted for over a year. In the framework of the project's study visits, officials and experts learned about achievements and success stories in the identification of victims in the fight against human trafficking. Around 80 participants attended the two-day conference.

Trafficking in human beings is not a new phenomenon. However, criminal activities have adapted to modern societies, with traffickers using contemporary methods.

"Currently, the challenges of combating trafficking in human beings are mainly related to the fact that new forms of this criminal activity are emerging and rapidly spreading, preventing and detecting which requires new methods and resources," said Laima Garneliene, a judge from the Court of Appeal of Lithuania.

To continuously change our understanding of why irregular migration occurs and how victims are transported across borders is therefore of major importance.

The most pressing challenge in the Russian context is forced labour within the Russian Federation. There are no encompassing statistics on the number of individuals being subjected to labour exploitation. The estimated number is nevertheless 10-15 million – all people who may be working illegally and under poor working conditions. The workers are foremost from the CIS countries, with the majority from Uzbekistan and Tajikistan.

The need for closer international cooperation is furthermore proven by cases of sham marriages, where young Latvian women are being exploited (mainly in Ireland) by men seeking EU residency rights. In these cases, women are lured to another country within the European Union to take part in arranged marriages. They are promised employment, but are instead forced into marriages which often involve violence and sexual assault.

The problem of identifying victims

A further challenge in combating human trafficking is the problem of identifying victims. At the moment there is still a grey area between whether a person is perceived as a victim or a criminal. There are thereby difficulties embedded in deciding on a person's status. A topic raised was how, for example, prosecutors and NGOs can have a different understanding of what constitutes being a victim or a criminal.

The difficulties connected to detecting victims of trafficking at border points are based on several factors. First of all, there can be a lack of awareness of a person's status and intentions. Victims may also not identify themselves as such, having been threatened or given clear instructions by the traffickers. Neither do victims stand out, therefore being seen as regular passengers or travellers.

One issue raised by several participants was the challenges connected to the proper execution of pre-trial investigations and difficulties in collecting sufficient evidence. Trafficking is a hidden crime: victims do not approach the police. It is therefore difficult to identify victims and even more difficult to get them to make statements. Victims' testimonies are the most important source of evidence and must be gathered with other proof. Those involved in the prosecution of offenders must provide assistance and protection to victims. One solution is to implement a system of specialised judges within trafficking cases. In order to see the full picture, there is also a need to gather evidence from several countries.

In Latvia, steps have been taken in the preventive phase of human trafficking. This involves educating young people concerning the risks inherent in migration, and also identifying those trying to recruit victims. The methods employed include checking ads in newspapers and on websites, as they play a central role in recruiting victims. Further undercover methods are applied in order to identify and arrest recruiters.

Further issues raised regarding the combating of human trafficking focus on greater political effort to deal with the root causes in source countries. Other possibilities include strict control of the labour market and closing down illegal businesses.

Although cooperation between states entails challenges, such as differing legislation in national law, international cooperation is of key importance in combatting human trafficking. Networks have a positive effect in terms of verifying victims and traffickers, exchanging knowledge and information on traffickers and routes and preventing recruitment.

The conference was organised by the Nordic-Baltic Network of Policewomen and the Nordic Council of Ministers' Office in Estonia with the support of the Estonian Police and Border Guard Board.