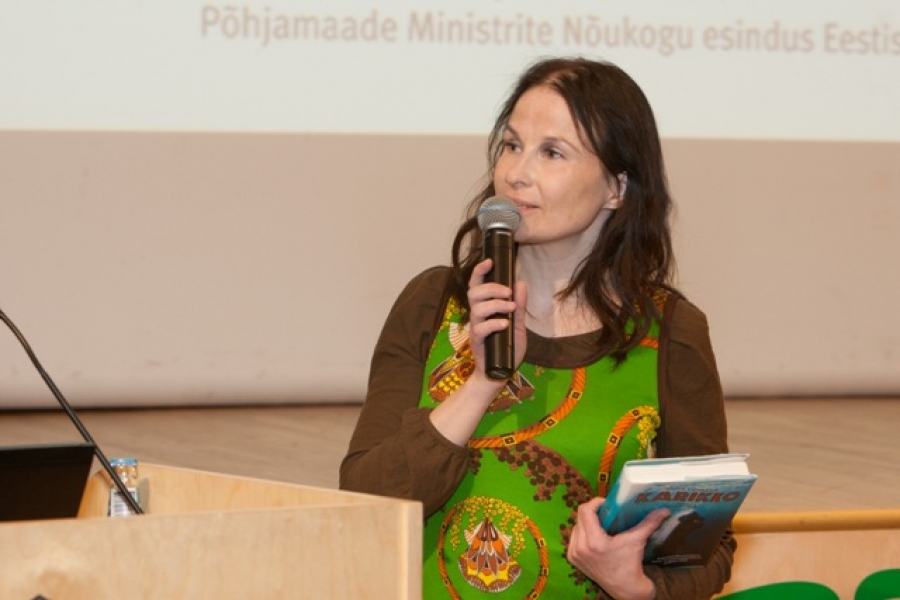 When researchers studying Estonian children's literature decried at the recent Nordic-Baltic Literature Forum the dearth of children's books in which nature plays a central role, Finnish author Seita Vuorela – the winner of the first Nordic Council Children and Young People's Literature Prize – revealed that nature is in fact the inspiration for all of her writing.

The influence of nature and its treatment as a subject can be seen in Vuorela and illustrator Jani Ikonen's book Karikko ('Reef'), which had yet to be published in Estonian by the time of the second Nordic-Baltic Literature Forum, which went by the name 'Who cares who reads?' and was held on 3 April 2014.

Vuorela and Ikonen explained the background to the publication of the award-winning book to the more than 200 visitors to the forum, who included library workers, writers, translators, teachers and book lovers. Vuorela said she associated reading and writing with a phenomenon that is being seen less and less in today's world – slowness. She compared the birth of a book to a particularly slow-flowing underground river, with it sometimes taking many years for an idea to form into a story.

Ikonen said that as an illustrator it was very exciting for him to be part of the book's creation from the very beginning, since this allows the words and pictures to form a whole and create a dialogue.

The author and illustrator agreed that one of the aims of literature is to help children cope with difficult events in life, such as someone dying, but that it also plays an important role in giving meaning to and ensuring the longevity of culture. Vuorela works with public officials, teachers and social workers who deal with immigrants. She says her latest book touches on the topic of refugees and migrants and creates a world which is similar to Russia and Iran. Vuorela says it is important that immigrants are able to get into the book and better understand the society in their new homeland, and she also hopes the work will address issues that are significant to the readers themselves.

Who cares who reads?

The short answer to the question posed by the title of the second Nordic-Baltic Literatur Forum is: yes! It became clear from the presentations made and discussions held at the forum that children are not only interested in but are indeed also reading books. It was also agreed that children are important, as is generating and maintaining the enjoyment they gain from reading. At the same time, children are dependent on the choices adults make, the example they set and their ability to make reading exciting. A number of the experts and authors who took to the stage at the forum mentioned that the different ways in which boys and girls read also needs to be taken into account.

Multiple award-winning author and illustrator Áslaug Jónsdóttir, the Icelandic nominee for the Nordic Council Children and Young People's Literature Prize in 2013, said that although the extent to which children read and their interest in literature generally are cause for widespread concern, more worrying is the fact that adults who don't read set a bad example and that reading as a pastime depends on a family's income – the more money they have, the more books they can afford, and of course vice versa. The amount children are reading in Iceland is rising, Jónsdóttir says, although more could be written on subjects that kids today are interested in.

Jónsdóttir's highly respected works are being used in Iceland as part of a new holistic teaching method. The books are being published based on the ideas of three Nordic authors – Jónsdóttir and writers from the Faroe Islands and Sweden. The series, which is about trolls, is so popular that the Icelandic writer was selected as one of the faces of this year's troll-themed Nordic Library Week. This special event, which is held during the first week of November, is also open to libraries, schools, cultural centres, kindergartens and other interested parties in Estonia.

Photos from the literature forum 2014 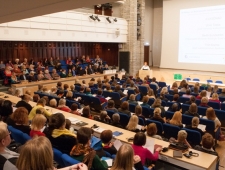 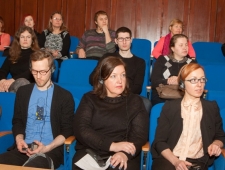 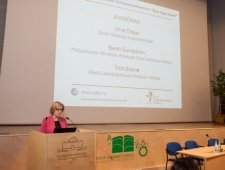 Library of the future

A major role to play is played in getting children to read books and maintaining their interest in reading by libraries, which must keep up with a rapidly changing and technologically advancing world. Stavanger in Norway saw the opening earlier this year of an 'experience library' or 'library of the future', whose programme director Anne Liv Tønnessen spoke at the literatue forum in Tallinn of the principles behind and starting point of the library.

Tønnessen explained that a number of factors had to be taken into account in designing the library: the number of books being borrowed is down; borrower behaviour has changed, with readers consuming literature in a different way; and while there remains a need for somewhere to gather, buildings and institutions per se are no longer needed. This led to the creation of the new library, where there are a lot of tables and chairs but few shelves, flexible opening hours and a staff that has to be capable of dealing with just about everything. As such, the library has evolved both physically and intellectually with the introduction of a new management model in the organisation.

Awareness-raising, marketing and website development have key places in the work of the new library, as Tønnessen says it must sell itself and be visible. A play area and close cooperation with schools have important places in the library's work with children.

Speaking alongside Tønnessen at the forum was Lotte Lykke Simonsen – herself a former library worker and one-time employee of Danish broadcaster DR, now an editor with the Carlsen publishing house – who said that librarians today are much more than mere librarians.

The efforts that are being made in Latvia to popularise reading were introduced by journalist, editor and writer Arno Jundze.

Children's literature researcher Jaanika Palm from the Estonian Children's Literature Centre gave an overview of the children's books that have been published in the country over the last three years. She explained that around 600 new books hit the shelves every year, 60% of which are works of translation – with more and more books aimed at the 10-14 age group in particular being translated. Palm said that children's literature is growing in popularity and that the label of "children's author" has taken on a certain prestige. An interesting fact that Palm brought to the audience's attention was that while both men and women write for children, men tend to write poetry and women tend to write prose.

Palm said that kids are interested in reading books that offer fun and excitement. Novels written for young people in the past were generally realistic, but the themes today are more diverse and the influence of foreign authors has ushered in an era of fantasy – in the level of quality of which, Palm feels, there remains room for improvement. The subjects she said needed to be reflected more in literature were school life, relationships between children, nature, animals and country life.

Helin Puksand, a lecturer in school pedagogy at the Institute of Educational Sciences of Tallinn University, gave an overview of the kind of books Estonian youngsters from Grades 9 and 11 are reading today.

Reading has the potential to be much more than just a pastime, however. It can be used to help children and teenagers overcome trauma and talk about painful subjects. Psychologist Veronika Mudėnaitė from the Our Home children's day centre in Lithuania described how bibliotherapy works with youngsters.

Winning over everyone's hearts at the end of the forum was Susi the reading dog, whose successes in encouraging children to read and cheering up those in hospital were listed by her owner Maarja Tali, a founding member of the NPO Punane Koer, and Anneli Kengsepp, the chief librarian for children's and teenagers' services at Tallinn Central Library.

The Nordic-Baltic Literature Forum was held for the second consecutive year as part of the Tallinn Book Fair. This time the forum was organised by the Estonian Children's Literature Centre, working with the Nordic Council of Ministers' Office in Estonia, and with the assistance of a number of valued partners and all of the embassies of the Nordic countries in Estonia. The book fair was opened by Estonian Minister of Culture Urve Tiidus, who greeted those attending the literature forum.

The reason the Nordic Council of Ministers' Office in Estonia felt it important to organise a forum focussing on children's literature was that skills in reading, interpretation and analysis are indispensable in today's information society. Reading lays the foundations for people to be able to give meaning to text, to appreciate different cultures and to empathise with others – and reading starts with children's books. In order for youngsters to find their way to such books, there must be respect for writers, libraries and teachers. We want children in the Nordic countries and Baltic States to be able to read, to be able to understand and thus to comprehend the concept of freedom and the value of being human.

"The forum was designed to allow people to share their experiences and observations and to compare research material reflecting the status of and developments in children's literature, the extent to which and what exactly young people are reading, and generating an interest in reading in them," explained Eha Vain, a cultural adviser with the Nordic Council of Ministers' Office in Estonia and the driving force behind the forum.

Here you can find out more about the forum, review its presentations and take a look at photos.