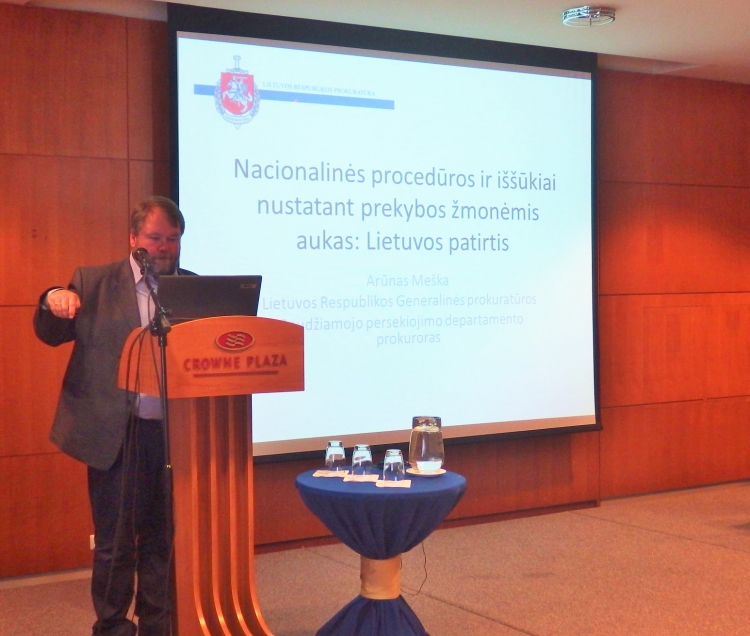 Arūnas Meška, a Prosecutor with the Lithuanian Prosecutor General’s Office

Lithuania is developing procedures that are unique in the Nordic-Baltic region in the fight against human trafficking and in identifying and assisting victims. These developments piqued the interest of experts from the Baltic States and Nordic countries at a forum held in Vilnius at the start of June as part of a project of the Nordic Council of Ministers aimed at combating human trafficking.

This fight is one of the priority areas for the Lithuanian Ministry of the Interior, confirmed deputy minister Artūras Norkevičius. He said that the forms human trafficking takes change all the time, which is why awareness-raising is so important in order to identify victims.

The Nordic Council of Ministers supports the fight against human trafficking and breaches of human rights by creating cooperation networks of experts from different fields which can then be used by the experts in their everyday work, explained Kenneth Broman, the chief of staff from the organisation's secretariat.

Lithuania to date has lacked uniform guidelines on responding to cases of human trafficking. It is difficult to ascertain who the perpetrator is, who the victim is and who the mediator is. Cooperation is deficient and information exchange scarce, said Arūnas Meška, a Prosecutor with the Lithuanian Prosecutor General's Office. Meška is leading the working group charged with the task of developing uniform guidelines. He says that the objective of the working group, which brings together all agencies that come into contact with human trafficking, is to create a single database and fix definitions and procedures. Support for cooperation between the police and NGOs dealing with victims is important, because victims often do not trust the police – complicating cooperation with them in investigating cases.

What makes Lithuania even more unique is that the country has six prosecutors who specialise in cases of human trafficking. The police in the country are also actively involved in preventive work on the issue among vulnerable groups in society.

The Nordic countries and the other Baltic States lack such a comprehensive and systematic approach to the fight against human trafficking and to assisting victims. The Lithuanian Prosecutor General and Ministry of the Interior hope to complete the guidelines in the near future.

If you don't know what you're looking for, you won't find it

Investigators and prosecutors who have come into contact with cases and victims of human trafficking confirmed that victims are difficult to identify and that much of the problem lies in attitudes and the desire to recognise victims in the first place – if you don't know what you're looking for and don't recognise what you see, you won't find it.

Liaison Police Attorney for Norway Rudolf Christofferson, from Eurojust, stressed that victims often refuse to admit that they have fallen into the clutches of human trafficking. They are not aware of their situation and may even seem happy, making no complaints. At the same time, other victims often change their statements during traumatic and repeated questioning and act uncivilly and inappropriately due to psychological stress, especially if the accused are also present at the questioning or court session.

A number of experts who spoke at the forum remarked that the main aim of investigating cases of human trafficking should be to help victims and to overcome stereotypes about what a victim looks like or how they behave. Men can also be victims, as can children who beg and sell things on the street in the middle of the day in the middle of the working week, children who steal things from shops, and others.

Märta Johannson, a Senior Lecturer from Örebro University in Sweden, explained that the most important aspect of investigating cases of human trafficking is clarifying and proving the unlawful motives of the perpetrator, not the behaviour of the victim. She says that although helping the victim is imperative, practice shows that in places too much or too little of the focus is given to the victim at different stages of an investigation. From the point of view of international principals, the behaviour of the victim in a case of human trafficking is unimportant if a crime is being or has already been committed. It is not the claims of the victim, but those of the perpetrator, and their unlawful activities and motives that should be the focal point of any investigation – all the more so when cooperation between the police and a traumatised victim is often complicated. At the same time, multifaceted assistance for victims (including legal advice) requires greater attention.

The police officers, prosecutors, border guards, politicians and representatives of NGOs and ministries from the Baltic States and Nordic countries who took part in the forum discussed in working groups what the authorities need to do to more effectively help victims. Read the proposals here.

The objective of the project was to bring together experts from the Nordic countries, the Baltic States and north-western Russia so as to exchange experience and establish contacts needed in day-to-day work.

Comprising four events, the project came to an end with the Vilnius forum, but the Nordic Council of Ministers plans to continue working with the Baltic States as part of a new project in the fight against human trafficking.

Visit our image gallery to view pictures from the forum.